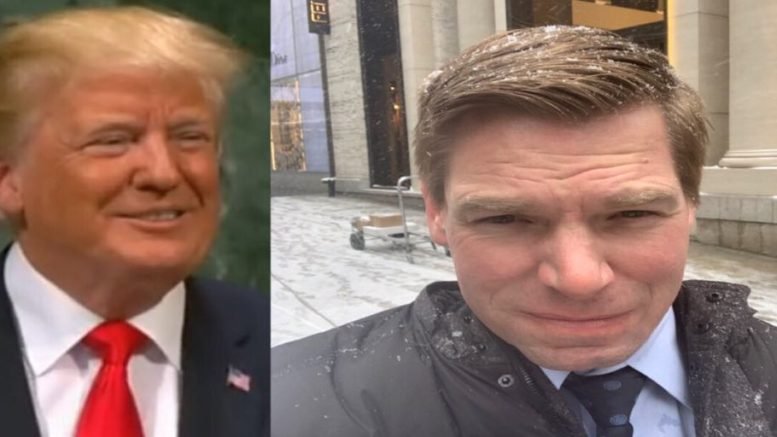 In fact, he is so infected with Trump Derangement Syndrome that he can’t even buy a  cup of coffee without thinking about President Trump and virtue signal about it. It’s just plain pitiful at this point.

Swalwell took to Twitter Wednesday afternoon to brag about walking to an alternative place to buy coffee instead of the Trump Tower in New York City.

Anti-Trump Swalwell whined, “It’s snowing in #NewYork. I need coffee. The closest cafe is inside Trump Tower. This is me walking to an alternative.”

Swalwell is so brave and sure showed President Trump. NOT!

Several people took notice of his cry for attention and ate him alive on Twitter. (Continued Below)

James Woods, Dan Bongino, Donald Trump Jr. were just a few who mocked Swalwell along with the rest of Twitter “nuking” him.

Remember this is same guy who suggested the government use nuclear weapons against those who did not obey with a “hypothetical” gun ban. (Continued Below)

It’s snowing in #NewYork. I need coffee. The closest cafe is inside Trump Tower. This is me walking to an alternative. pic.twitter.com/RLb0tAy2yT

Hahaha. Hes trying so hard to be like AOC but has exactly zero charisma or personality… https://t.co/QBWjli8tOU

Keep walking. Hear they have good coffee in Venezuela… https://t.co/yaaeR3uy4K

Here are a few of our favorites:

You’re literally bragging about how weak and triggered you are. Good job. pic.twitter.com/M8LvwhaNdj

Please. It’s New York, there are coffee shops everywhere. You just wanted to post about Trump and be dramatic. Sad!

Is he in NYC for another appearance on Fox? Does he live there? His district is in CA and we have a few problems that need his attention here. pic.twitter.com/EXL3iWZa0q

Ur family must be so proud at how courageous u were to walk in 1 inch of snow half a block! Thanks for showing the country brave men still exist 🙄

You take soy milk in your coffee, right?

There’s multiple places to get coffee every block in Manhattan, you tiresome chud

Seriously? You’re a member of Congress. At least try to act like an adult.

*Look at me defiantly walking in a coating of snow to stick it to Drumpf! I’M SO AWESOME!*

Ok….enjoy your starbucks crap or whatever man.

Do you always look this constipated when you walk?

How Swalwell sees himself pic.twitter.com/YNYNKpw0nD

How Swalwell thinks he looks vs. how he actually looks. pic.twitter.com/xEUyWxV5ii

Confirmed: Swalwell is too stupid to come in from the cold. pic.twitter.com/9MAkA9ee6N

(Related: After Clashing With Collins, Swalwell Gets Denied By Whitaker: ‘I’m Not Here To Be A Puppet’)