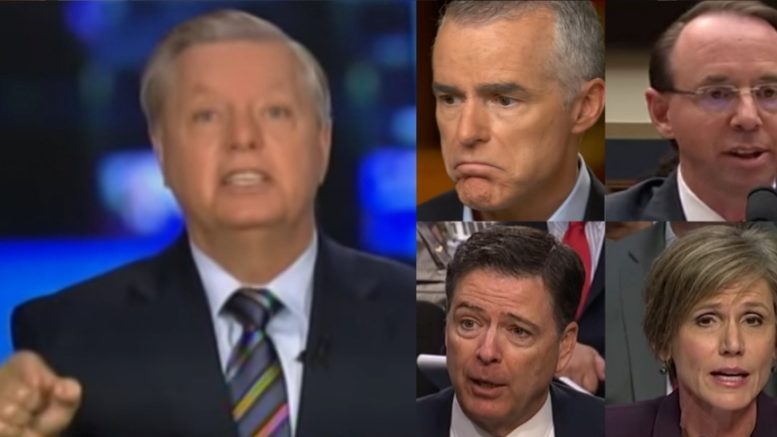 When asked about his thoughts on the pending Mueller report, Graham’s main concern didn’t focus on what may be in the report itself, but rather his desire to investigate the background of how Mueller’s probe formed in the first place.

Graham set the stage for what is looking to be an all-out investigation into alleged plots that were planned  carried out by top officials of the FBI & DOJ in an effort to take down President Trump.

The South Carolina Senator said that he’s fully prepared to haul in Andrew McCabe, Rod Rosenstein, James Comey, Sally Yates and anyone else who can help him “get to the bottom” of what exactly went on during situations in question.

Replying to what he thought about the Mueller report, Graham said, “What I’m gonna do is look at the Department of Justice and the FBI and look at the other side of the story.” He added, “How was an intelligence investigation opened up against the Trump campaign? How did they get a warrant against an American citizen on four separate occasions, based on a document paid for by the Democratic Party that was a bunch of garbage?” Video Below

Graham went on to claim, “The counter-intelligence investigation on the Trump campaign, I think, was a backdoor attempt to infiltrate the campaign.” He backed this notion up with a reminder that at least one confidential informant was embedded in the campaign, yet obviously didn’t find any collusion with Russia.

He then pivoted and brought up the latest information stemming from Andrew McCabe that suggests there was a plot to overthrow Trump by invoking the 25th Amendment. Graham said, “I’m gonna have McCabe come in, Rosenstein come in, anybody and everybody around that conversation, and we’re gonna find out who’s lying.”

He then stated that every American should be “worried about what happened in 2016.” He continued, “Was this an effort by the Department of Justice and the FBI senior officials to fix an election, to undercut the President who was legitimately elected? If the shoe were on the other foot, we’d be having a lot more tension to this if it’d been about a Democratic President instead of Trump.” Video Below