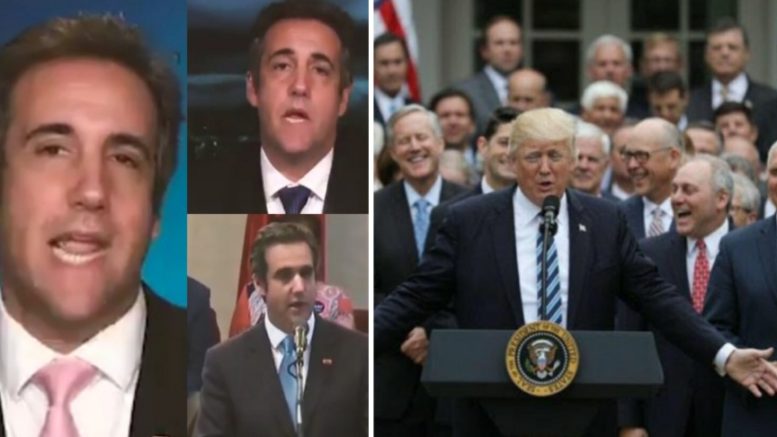 Tensions are high on both sides of the aisle on the eve of Michael Cohen’s testimony!

On Tuesday afternoon, the GOP unleashed a pre-emptive strike targeting President Trump’s former attorney, as he is due to appear in a public hearing on Capitol Hill.

Democrats are treating Cohen as their first “star witness” since taking control of the House Oversight Committee, despite him being prosecuted and sentenced to prison for lying to Congress.

While Dems were busy embracing the prospects of hearing from a liar, like Cohen, the GOP completely annihilated their “star witness” with video evidence that already casts doubt on anything negative he may bring forth.

On Tuesday afternoon, the GOP tweeted a video that showed a compilation of several past statements Cohen made in pure support of President Trump. Video Below

In the video, Cohen is heard describing President Trump as “generous, compassionate, principled, empathetic, kind, humble, honest and genuine,” while other clips of him voicing support for Trump are played.

The GOP captioned the video with, “For years, Michael Cohen praised @realDonaldTrump’s honesty and integrity.”

The statement continued, “It was only after Cohen was caught for tax evasion and other personal financial misdeeds, he began lying about President Trump in an effort to save face.” Video Below

It was only after Cohen was caught for tax evasion and other personal financial misdeeds, he began lying about President Trump in an effort to save face. pic.twitter.com/AQnxxk7yBF

We leave you with Rep. Matt Gaetz tearing down Cohen.

I guess tomorrow we'll find out if there's anyone Cohen hasn't lied to!

I think it's entirely appropriate for any member of this body to challenge the truthfulness, veracity, and character for people who have a history and future full of lies.