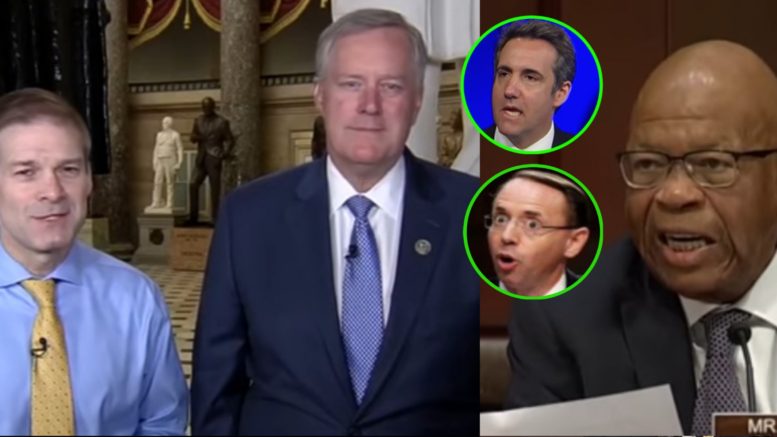 Former Trump attorney, Michael Cohen, will soon be making an appearance before the House Oversight Committee, in what is being ramped up as Democrats’ first big hearing since taking control of the committee in January.

Cohen is said to be a “star witness” for Democrats as they continue their quest of digging up any kind of dirt possible to use against President Trump.

As time ticks down to the “big hearing,” Reps Jim Jordan and Mark Meadows issued a letter to Chairman Elijah Cummings demanding Deputy Attorney General Rod Rosenstein appears at the hearing too.

In their letter, Jordan and Meadows state that they think it’s only fair if Rosenstein appears alongside Cohen due to the fact that Cummings refused their prior request for DOJ documents related to Cohen’s case.

They said in their letter, “Cummings has refused to request Justice Department documents elaborating Cohen’s criminal conduct.” And they feel the next best method to ensure a “fair and thorough hearing” is to have a Justice Department official, in this case Rod Rosenstein, to speak on matters related to Cohen’s conduct.

The pair of Congressmen argue that Rosenstein could “speak to Cohen’s criminal conduct across Justice Department components” if he were present.

The letter cites two Justice Department components that have information on Cohen’s criminal conduct that eventually led to him being sentenced to prison. The components listed were the U.S. Attorney’s Office for the Southern District of New York and the Special Counsel’s Office.

Soon after it was sent to Cummings, Oversight Committee Republicans posted excerpts of the letter on Twitter, which can be seen below.

Excerpts From Reps Jordan and Meadows’ Letter To Elijah Cummings

Not long after excerpts of the letter were posted to Twitter, Meadows made a comment in regards to Rosenstein discussing “Rule of Law” at a “Strategic Studies” conference. We leave you with Meadows’ tweet.

Interesting to see Rod Rosenstein speak at a "Strategic Studies" conference discussing 'Rule of Law.' The real "strategy" = appearing there and not before Congress, under oath.