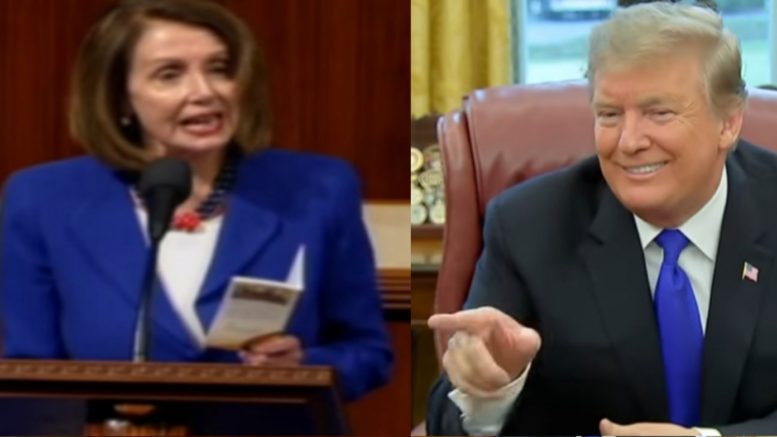 Speaker Nancy Pelosi (D-CA) took to the House floor on Tuesday where she begged Republicans to not let Trump build the wall.

While speaking on the House floor, Pelosi began by citing part of the Constitution then she suggested that it’s time for America to have a “values based civics lesson.”

“I applaud our colleague congressman Castro for his leadership and ensuring that this house was ready to reassert our responsibility under the Constitution, in it’s system of checks and balances.” She said.

“In their wisdom, our founders rejected the idea of a monarch. They didn’t want to live under that. They made that clear. They fought a war of indepence to free themselves from that. And therefore, in their wisdom, they put forth in this constitution a heart and soul and core of it. The separation of powers. Co-equal branches of government to be a check and balance on each other.” Pelosi stated.

She went on to say our founders fathers saw the wisdom of the checks and balances, then they added the Bill of Rights. “But the core of the Constitution, is the separation of power.” She explained. (Video Below)

After trying to sell her talking points using the Constitution, Pelosi took shots at President Trump next for his executive powers that he holds.

She continued her rant, “But we in this House of Representatives, each one of us and every one in public service in our country takes an oath of office, [to] support and defend the Constitution of the United States. It’s our oath, and we promise. And that Constitution is about the separation of powers that is being usurped by the Executive Branch.” She whined. “We in the legislative branch cannot let that happen!” (Video Below)

Next, she stumbled on her words as she tried to get out her next point pressing Republicans to go against the President.

“In fact, our Republican… I appeal to our Republican colleagues, because I do believe and trust they are people of their word. And if they take an oath to uphold the Constitution that they will honor it with their vote on the floor today.”

Then she claimed that President Trump is asking everyone to “turn their backs on the oath of office that [they] took to the Constitution of the United States.” She added, “I do not believe that the Republicans want to do that. I don’t think it’s consistent with what they had advocated in the near term and historically.”

Further trying to scare Republicans she rambled, “The question is: what do you think about yourself? Your Congress? Your conscience? Your oath of office? And I trust that our colleagues, as I say, will be consistent in their beliefs and join us in honoring the oath we all take to support. The resolution is not about politics. It’s not about partisanship, it’s about patriotism.

When did Nancy Pelosi start caring about the Constitution or patriotism? This is just another move to stop the President from having a win and keeping his promise to protect America.