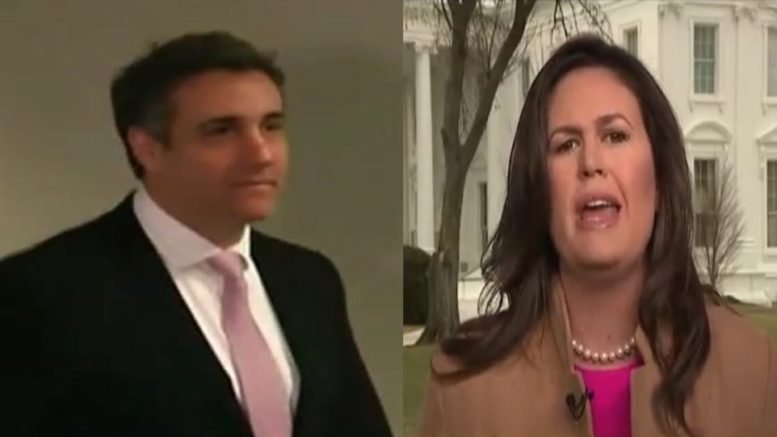 Michael Cohen, President Trump’s former attorney, arrived on Capitol Hill Tuesday for the first of three congressional hearings this week where he is expected to testify against Trump.

Michael Cohen did not answer questions from reporters about why he should be trusted as he entered the hearing room Tuesday. As part of a deal with prosecutors, Cohen pleaded guilty to previously lying to Congress about Trump’s past business dealings.

The White House issued a statement Tuesday after Cohen was spotted and described him as a liar.

Press Secretary Sarah Huckabee Sanders said, “Disgraced felon Michael Cohen is going to prison for lying to Congress and making other false statements. Sadly, he will go before Congress this week and we can expect more of the same. It’s laughable that anyone would take a convicted liar like Cohen at his word, and pathetic to see him given yet another opportunity to spread his lies.(Video Below)

According to a recent memo sent out by committee staff, Cohen’s appearance before the House oversight panel will concern various financial issues related to the 2016 presidential campaign, including payments to adult film star Stormy Daniels and former Playboy model Karen McDougal that federal prosecutors in New York say were directed by Trump. The hearing will also examine whether Trump has complied with campaign finance and tax laws, his ties to the Trump International Hotel in Washington and “potential and actual conflicts of interest.” Reported Fox News.

Chief intelligence correspondent, Catherine Herridge, explained how Cohen got to this point. “Michael Cohen was up here before the same committee and he took questions about a Trump Tower Moscow real estate project that was being discussed during the campaign. Cohen testified to the Senate Intelligence Committee that those discussions about the Moscow projected ended in January 2016. The special counsel found the discussions continued until June 2016.” She said.

Catherine added, “It was this lie that got Cohen prosecuted by the special counsel. Lawmakers want to know why Cohen committed that lie, because the underlying act, the business deal in Moscow, was not a criminal act. And whether Cohen’s lie was on his own initiative or directed by someone else within the campaign.” (Video Below)

When asked what we can learn about “Russia” during the hearing, Catherine responded, “What’s important to watch in terms of some of the choreography on the Hill this week is what is actually going to be handled in the public testimony. And the public testimony in not going to include Russia. Russia will be dealt with in the closed session with the Senate intelligence committee and then in a closed session before the House intelligence committee on Thursday.”

She added, “What we can expect Wednesday is testimony about Michael Cohen’s business dealing with the Trump organization and specially President Trump before he became the Commander in Chief, as well as the hush money payments that the President has denied and campaign finance violations.”

“So for critics, what they’ll say is Wednesday is all about issues that are unrelated to Russia, which is the issue that got this whole ball rolling in the first place.” Catherine concluded.