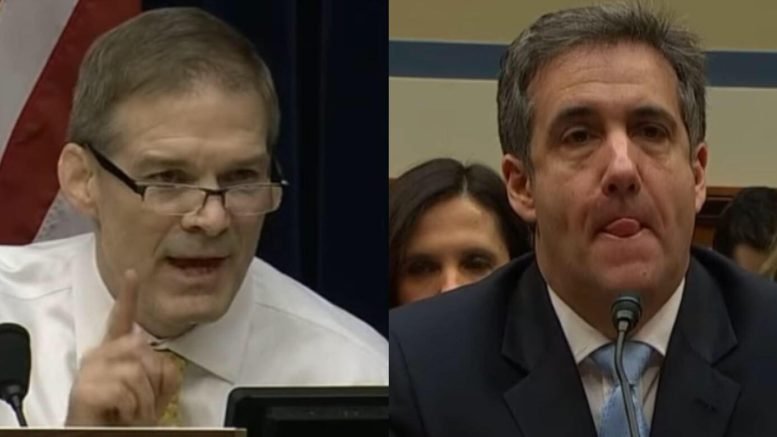 As the hearing started, Rep. Mark Meadows (R-OH) gave his opening statement and ripped Democrats for their “first big witness,” who is a proven liar. (Video Below)

Jordan began by pointing out the Democrats’ first big witness is a guy who is going to prison for lying to Congress.

“Chairman, your Chairmanship will always be identified with this hearing. And we all need to understand what this is: this is the Michael Cohen hearing presented by Lanny Davis.” He said.

“That’s right! Lanny Davis choreographed the whole darn thing! The Clintons best friend… loyalist, operative. Lanny Davis put this all together. You know how we know? He told our staff. He told the committee staff! The hearing was his idea. He selected this committee. He had to talk Michael Cohen into coming. And most importantly, he had to persuade the Chairman to actually have it.” Jordan declared.

“This might be the first time someone convicted of lying to Congress has appeared again so quickly in front of Congress. Certainly it’s the first time a convicted perjurer has been brought back to be a star witness in hearing.” Jordan continued. (Video Below)

Jordan explained, “Because, no other committee would do it.

“Think about this: with Mr. Cohen here, this committee– we’ve got lots of lawyers on this committee. This committee is actually encouraging a witness to violate attorney client privilege.” He said.

“When we legitimize this institution, we’re supposed to pursue the truth, but you have stacked the deck against the truth.” Jordan pointed out, “We’re only allowed to ask certain questions.” (Video Below)

Then, he explained the Democrats are using Cohen as their “pasty.” Jordan continued, “They got to find somebody, somewhere to say something, so they can try to remove the President from office, because Tom Styer told him to.”

Jordan revealed that Tom Styer organized town hall meetings and one of them was in Chairman Cummings district in Baltimore.

“The best they can find to start this process, Michael Cohen: a fraudster, a cheat, convicted felon and in two months a federal inmate.”

(Related: Cohen Hearing Kicks Off With A Bang As Jordan & Meadows Make A Bold Move To Postpone It)

Jordan laid down the hammer next when he announced Democrats stick to the playbook.

“Remember how all this started: the Clinton campaign hired Perkin Coie law firm, who hired Glenn Simpson, who hired a foreigner, Christopher Steele, who put together a fake dossier that the FBI used to go get a warrant to spy on the Trump campaign. But when that whole scheme failed and the American people said we’re gonna make Donald Trump President, they said we got to do something else. So now, Clinton loyalist, Clinton operative, Lanny Davis, has persuaded the Chairman of the Oversight Committee to a convicted felon to tell stories and lie about the President of the United States, so they call all start their impeachment process. Mr. Chairman, we are better than that.” Jordan concluded.