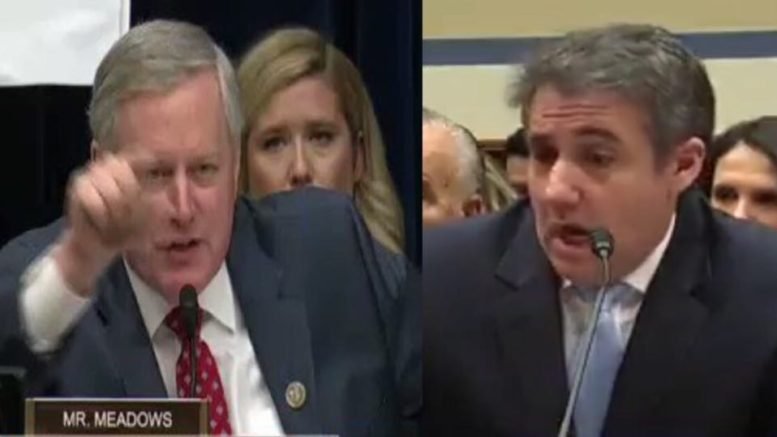 During the hearing, Rep. Mark Meadows (R-OH) slammed Cohen after he claimed he was “a nice guy.” (Video Below)

Rep. Mark Meadows directly asked Michael Cohen if he got money from the bank of Kazakhstan.

Cohen tried to spin the question by saying, “it’s not a bank of Kazakhstan, it’s called BTA.”

Meadows shot back and said, “BTA Bank, Kazakhstan… did you get money from them?”

Cohen admitted he did. (Video Below)

Meadows asked for what purpose and Cohen replied, “The purpose was because the former CEO of that bank had absconded with 4-6 billion dollars and some of the money was here in the United States and they sought my assistance in terms of finding, locating that money to recollect it.”

“So you’re saying all the reports that you were paid, in some– estimates over 4 million dollars to have access and understanding? You’re saying that all of that just paid to you because you’re a nice guy?” Meadows asked.

“Well, I am a nice guy but more importantly…” Cohen said. (Video Below)

“I would beg to differ. The record reflects you’re not a nice guy!” Meadows shot back.

Cohen then rambled on, and Meadows seemed to not care what else he spewed out of his mouth.

Rep. Mark Meadows: You're saying all of that was just paid to you just because you're a nice guy?

Cohen: Well, I am a nice guy but more importantly —

Meadows: I would beg to differ. The record reflects you're not a nice guy. https://t.co/4McXejykRV pic.twitter.com/5n0HQzCiNP