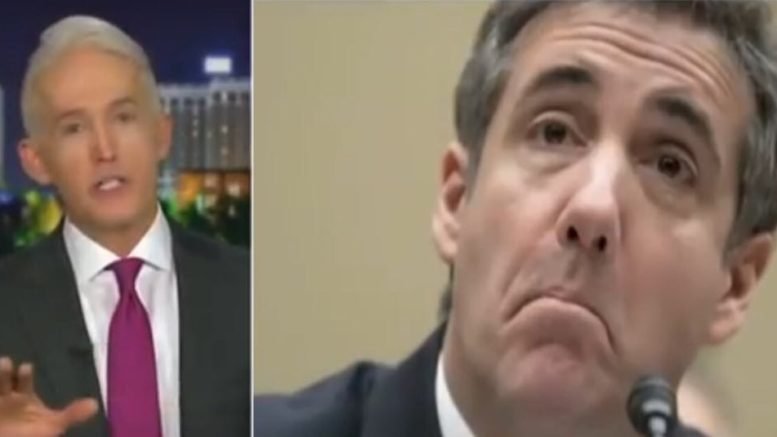 Gowdy slammed Democrats for their nothing burger investigation and their “star witness.” (Video Below)

Trey Gowdy began by explaining that 60 Democrats have already moved forward with impeachment towards the President, despite Robert Mueller’s report that will be released soon. “They ain’t waiting on nothing!” He expressed.

Gowdy pointed out that “collusion” was what started the whole investigation against the President, and he noted that Michael Cohen was consistent with one thing.

“On October 2017, he said there was ‘no evidence of conspiracy’ between the Trump campaign and Russia. And he said it again today, but Democrats don’t want to hear that.” He said.

“So now, they want to move to an FEC violation.” Gowdy announced. (Video Below)

When asked what Gowdy thought of Cohen claiming that Trump knew of Roger Stone communicating with Wikileaks, Gowdy said, “Well, there’s always three aspects to that. There’s the hacking of the server, there’s the hacking of John Podesta’s emails, and the dissemination of that information.”

Gowdy said he asked Cohen two years ago if he had any evidence of the President or the campaign being connected with dissemination.

“Let’s assume, I’d be careful doing this– let’s assume that Michael Cohen is telling the truth. What crime was committed? What crime is it listening to Roger Stone say ‘I think Wikileaks is about to do what they tweeted they are going to do and dump a bunch of documents?” He asked. (Video Below)

During the hearing, Michael Cohen admitted to Reps. Jody Hice (R-GA) and Jim Jordan (R-OH) that he spoke with “Chairman Adam Schiff and his people.”

Jordan pressed details out of Cohen where he admitted, ““I spoke to Mr. Schiff about about topics that were going to be raised at the upcoming hearing.”

(Related: During The Hearing, Jordan Grills Out Schiff’s Involvement In Cohen’s Testimony: ‘What Did You Talk To Mr. Schiff About?)

Gowdy responded, “I think Jimmy had it about right. Wow! And it’s not ‘wow’ that Adam and Cummings talked to witness. The real ‘wow’ for me, I mean, I expect them to try do that. The real ‘wow’ for me was The Washington Post, The New York Times, Politico, The Hill… their reaction when Republicans were accused of talking to witnesses.”

He added, “It was front page information! Elijah and Adam went nuts! If there was even an insinuation that a Republican Chairman had talked to a witness…. I want you to count how many articles you see tomorrow about Schiff and Cummings prepping Cohen before he comes to Congress. You won’t find a one.”

He added, “In fact, Mueller did something he never does: he actually spoke. He actually corrected Michael Cohen and his lawyer.”

Gowdy pointed out that the fact that Congress would allow Cohen as their starwitness breaks his heart. “To call a convicted perjurer as your first witness was stunning to watch.

Related: When Asked If He Prepared For The Hearing With Dems, Cohen Let The Cat Out Of The Bag: ‘We Spoke With Schiff & His People’)