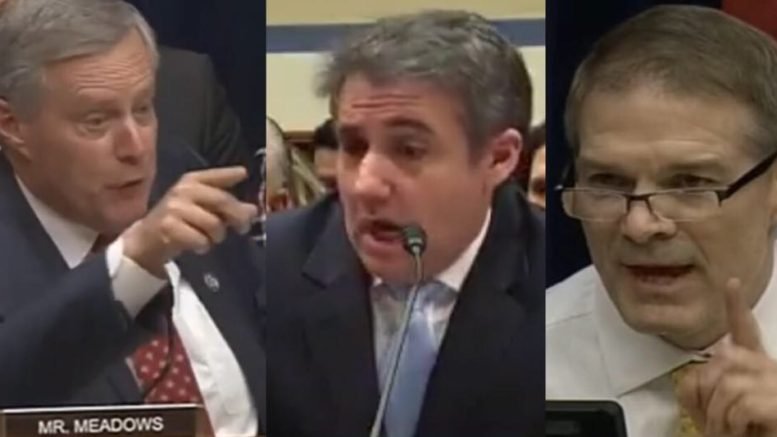 However, Reps. Mark Meadows (R-NC) and Jim Jordan (R-OH) caught Cohen lying under oath about foreign entities and sent a letter to Attorney General William Barr for perjury and knowingly making false statements before the Committee at yesterday’s hearing. (Videos Below)

During the hearing on Wednesday, Mark Meadows pressed Michael Cohen on payments he received from Kazakhstan and Cohen tried to spin the story.

“Mr. Cohen, everything’s been made of your lies in the past, I’m concerned about your lies today. Under your testimony just a few minutes ago, to me, you indicated you had contracts with foreign entities. And yet, we have a truth and testimony disclosure form which requires you to list those foreign contacts for the last two years. And yet, you put ‘n/a’ on there, and it’s a criminal offense to not have that accurately.” Meadows said.

Meadows asked, “So when were you lying? Either the testimony to me earlier today or when you filled out the form? (Videos Below)

“His questions… unfortunately, I don’t have an answer for his question.” Cohen responded

Rep. Mark Meadows took to Twitter Wednesday and wrote, “I just entered a referral for criminal investigation of Michael Cohen, who violated the Foreign Agents Registration Act by illegally lobbying on behalf of foreign entities without registering Cohen talks about “blind loyalty.” His real blind loyalty? It’s to the almighty dollar.”

Further, the Republican Oversight Committee posted on Twitter the letter from Meadows and Jordan to Attorney William Barr and wrote, “#BREAKING: Read @Jim_Jordan & @RepMarkMeadows’s letter referring #MichaelCohen to the Department of Justice for perjury and knowingly making false statements before the Committee at yesterday’s hearing.” (Videos Below)

The official letter to Attorney General William Barr from Reps. Mark Meadows and William Barr can be read [HERE]

In their letter, the House Oversight Committee Republicans detailed several allegedly false statements made by Cohen on Wednesday. They also cited his claim that he “never defrauded any bank,” contrasting that with Cohen’s plea agreement that referred to his crimes as “bank fraud.”

“We write to refer significant evidence that Michael D. Cohen committed perjury and knowingly made false statements during his testimony before an Oversight and Reform Committee hearing,” they wrote. “While testifying under oath, Mr. Cohen made what appear to be numerous willfully and intentionally false statements of material fact contradicted by the record established by the Justice Department in United States v. Cohen.”

They added: “Mr. Cohen’s testimony before the Committee at times was in direct contradiction to assertions contained in pleadings authored by the United States Attorney’s Office for the Southern District of New York (SDNY.) There are other instances in which Mr. Cohen’s statements to the Committee were immediately contradicted by witnesses with firsthand knowledge of the subject matter.”

“This point– Mr. Cohen’s culpability for bank fraud– materially affects the Committee’s assessment of his credibility,” they wrote.

Jordan and Meadows also wrote that Cohen made false statements regarding his desire to work in the White House, or in some role in the Trump administration.

“Mr. Cohen repeatedly testified that he did not seek employment in the White House following President Trump’s election. This is demonstrably, materially, and intentionally false.” They stated.

During the hearing, Jordan blasted Cohen, claiming that he turned on President Trump because he didn’t land a job at the White House. Cohen denied it and said he, instead, wanted to be “the personal attorney to the president.” Further Cohen added, “I got exactly what I wanted.”

Following the exchange, the President’s sons, Donald Trump Jr. and Eric Trump, weighed in on Twitter, claiming Cohen was “lobbying EVERYONE to be ‘Chief of Staff,’” and that it was “the biggest joke of the entire transition.”

Nailed it. It really was the biggest joke of the entire transition. The beginning of his bitterness was when he realized that was never going to happen. #Delusional. https://t.co/ddizWugguU

The letter also cited a tweet by former New York City Police detective Bo Dietl, who said Cohen told him “several times” that he was “very angry and upset” that he did not get a job in the White House.

The GOP lawmakers also cited Cohen’s failure to list foreign contracts on a “Truth and Testimony” form he was required to fill out before the hearing.

Further, the Republicans flagged testimony regarding the hush money payments to Stormy Daniels, whose real name is Stephanie Clifford. They claimed that while Cohen testified he was “a good lawyer who understood the need to present his client with sound legal advice,” he also said he made a payment to Daniels “without bothering to consider whether that was improper, much less whether it was the right thing to do.”

Jordan and Meadows also said that Cohen made a false statement regarding his involvement with the creation of the Twitter account, @WomenForCohen. Cohen, on Wednesday, claimed he did not create the account, and someone from the firm RedFinch made it.

“We were having fun during a stressful time,” Cohen said Wednesday.

The Republicans countered that Cohen reportedly had asked someone to create the account to “elevate his profile.”

The letter said that Cohen’s testimony “was a spectacular and brazen attempt to knowing and willfully testify falsely and fictitiously to numerous material facts.” They claimed the testimony included “intentionally false statements designed to make himself look better on a national stage,” adding: “Mr. Cohen’s prior conviction for lying to Congress merits a heightened suspicion that he has yet again testified falsely before Congress.”

Official tweets from the Oversight Committee Republicans and videos of Mark Meadows:

📺 #ICYMI: Last night, @RepMarkMeadows joined @seanhannity to preview the referral of #MichaelCohen to DOJ for perjury and knowingly making false statements before the Committee. pic.twitter.com/tvWdf4uNwt

I just entered a referral for criminal investigation of Michael Cohen, who violated the Foreign Agents Registration Act by illegally lobbying on behalf of foreign entities without registering

Just another example of #MichaelCohen skirting the truth.