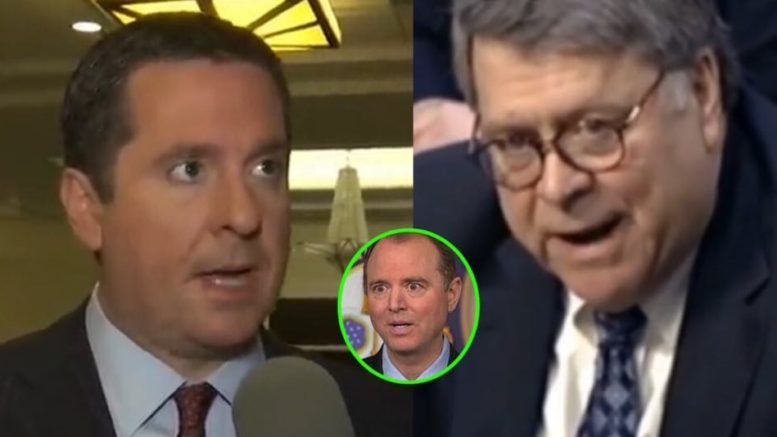 Nunes revealed that he plans to file criminal referrals to the Department of Justice for witnesses who have lied under oath to Congress. (Video Below)

Devin Nunes in his interview, explained that Democrats are shifting their tactics from from their “conclusion conspiracy obstruction rabbit hole” that they’ve been going down into and leading the American people. They are now switching it to financial crimes and other “supposed crimes.”

But, Nunes said he is still pushing forward and going to get to the bottom of what happened at the DOJ and FBI, further adding that everyone there is still held accountable.

He clarified by pointing out the fake news and misinformation that was pushed out to mislead the American people will ultimately, as well, be held accountable by the courts or otherwise.

Nunes then announced he will be making criminal referrals to the Department of Justice for witnesses who have lied under oath to Congress. (Video Below)

“As you know, some people have been [held accountable] in the Mueller investigation and have been bringing people to Justice on that, however, they’ve skipped a whole bunch of people who have lied and mislead Congress.”

When asked about Michael Cohen, Nunes said that Reps. Jim Jordan (R-OH) and Mark Meadows (R-NC) sent a referral to the DOJ for lying to Congress during his Wednesday testimony. (Video Below)

Next, Nunes was asked about his thoughts on whether Congressman Adam Schiff (D-CA) should be rescued from investigations for having contacts and a secret meeting with Glenn Simpson, who is the co-founder of Fusion GPS and who was part of the Steele Dossier.

Nunes said, “What we really need to know is… were they coordinating? Because we know in other instances, we’ve seen where the Democrats coordinated with witnesses. So if there was previous involvement between Glenn Simpson and either the House or Senate intelligence committee, that’d be really bad!”

(Related: Devin Nunes Unveils His Plan To Hold Corruptors Accountable Once Barr Is Confirmed: ‘We Will Be Making Criminal Referrals’)

“Glenn Simpson is clearly a bad actor here. He’s clearly someone who was an operative for the Democratic party apparatus. He’s a propaganda narrative operator– where the media would take his ‘supposed’ investigative research, which was really not investigative at all. It was just phony and there were hit pieces on politicians and the Trump campaign. As you all know that got fed into the FBI. Simpson is a bad actor. Whether or not he was coordinating with the Democrats in Congress, that [would] be some we all should know. And if that happened, I think, it would be a big problem.” Nunes concluded.