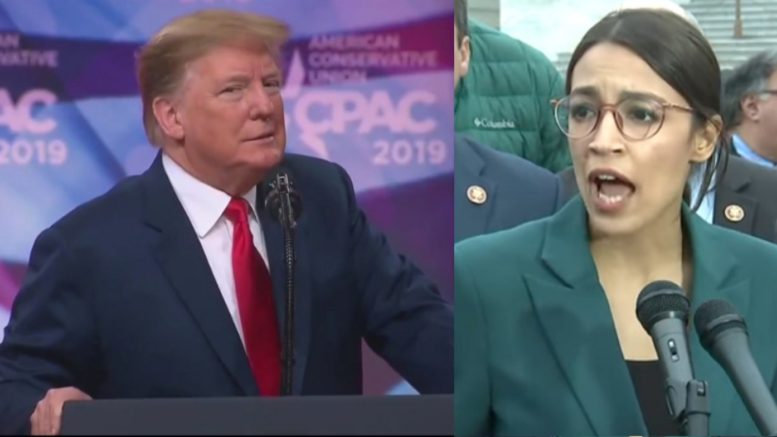 President Trump spoke during the Conservative Political Action Conference (CPAC) on Saturday and took a few jabs at the Green New Deal and those supporting it.

The Green New Deal, favored by prominent Democratic politicians such as freshman Rep. Alexandria Ocasio-Cortez and most of the current 2020 presidential candidates, would overhaul the country’s energy and economic policy and cost trillions, per Daily Caller. (Videos Below)

During his speech, President Trump mocked the Green New Deal while encouraging Democrats to keep pushing their absurd radical ideas.

The President said, “Our country is in big trouble, folks, because we have to get it back.  And when I look at what is happening on the other side, I encourage it. I say, no, no, I think the New Green Deal, or whatever the hell they call it …”

“The Green New Deal, I encourage it. I think it’s really something that they should promote.” Trump  sarcastically said.

“They should work hard on. It is something our country needs. Desperately, they have to go out and get it, but I’ll take the other side of that argument, only because I am mandated to. But they should stay with that argument and never change. No planes. No energy. When the wind stops blowing, that is the end of your electric.” He said. (Videos Below)

Then, President Trump acted out a scene hoping the wind blows so he can watch television.

“Darling, is the wind blowing today? I would like to watch television, darling. It’s true,” President Trump said after the crowd burst into laughter.

Later in his speech he told the crowd that the Green New Deal sounds like a high school term paper that got a low mark. (Videos Below)

Trump mocks AOC: “I think the New Green Deal, or whatever the hell they call it…I encourage it. I think it’s really something they should promote…they should work hard on.”

“They should stay with that argument, never change. No planes. no energy. When the wind stops blowing—" pic.twitter.com/744cwMvQdr

President Donald Trump unloads on "ranting and raving" "lunatic" Alexandria Ocasio-Cortez as he highlights the radical nature of her Green New Deal pic.twitter.com/6b1GcWQvET

President Trump continues to mock Ocasio-Cortez's Green New Deal: "When I'm on the debate stage with one of these maniacs. I mean, trains to Hawaii. How do you get to Europe? We have not figured that one out yet, we don't use airplanes anymore" pic.twitter.com/F6on0kQ7B9