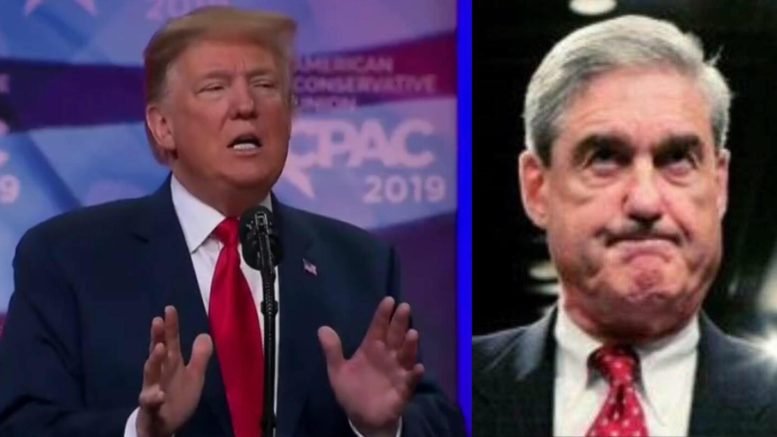 President Trump spoke during the Conservative Political Action Conference (CPAC) Saturday and fired up the crowd.

He touched on Robert Mueller’s “witch hunt” and the crowd went wild after he called it for what it is. (Videos Below)

During his speech, President Trump accused FBI Special Counsel Robert Mueller’s team of trying to take him out with “bulls—” and accused a top Clinton aide of not having recovered from getting his a– kicked.

The President further accused his opponents of moving away from the Russian collusion narrative as Mueller prepares to file his report on the investigation into Russian interference in the 2016 election. He said that the report was being produced “by people who weren’t elected.”

“Unfortunately you put the wrong people in a couple of positions and they leave people for a long time that shouldn’t be there and all of a sudden they’re trying to take you out with bulls—! Okay? It’s bulls–.” Trump said as he mocked the collusion hysteria. The crowd cheered and whistled.

“Now Robert Mueller, never received a vote, and neither did the person that appointed him. And as you know… the Attorney General says ‘I’m gonna recuse myself.” He added, while impersonating Jeff Sessions accent. “And I said, Why the hell didn’t he tell me that before I put him in? How do you recuse yourself?” (Videos Below)

Trump explained that Robert Mueller put “13 of the angriest Democrats in history” on his team.

“These are angry, angry people. You take a look at them. One of them was involved with Hillary Clinton Foundation, running it.” He added, “Another one has one of the worst reputation of any human being I’ve ever seen. All killers.”

Trump noted that he has conflicts with Mueller adding that he had a nasty business transaction with him. “He wanted the job as FBI Director and I didn’t give it to him.” (Videos Below)

The President also commended Reps. Jim Jordan (R-OH) and Mark Meadows (R-NC) and others for keeping up the fight for the American people against the corruption.

(Related: Men On A Mission: Meadows & Jordan Target Mueller’s Team In Their Latest Letter To Barr)

“I saw “Little Shifty Schift” yesterday, he went into a meeting and said ‘we’re going to look into his finances!’ Where did that come from? He always talked about Russia… collusion with Russia, collusion delusion.” He added.

“They fight so hard on this witch hunt, this phony deal… there’s no collusion, so now it morphs into, ‘let’s inspect every deal he’s ever done’… these people are sick”