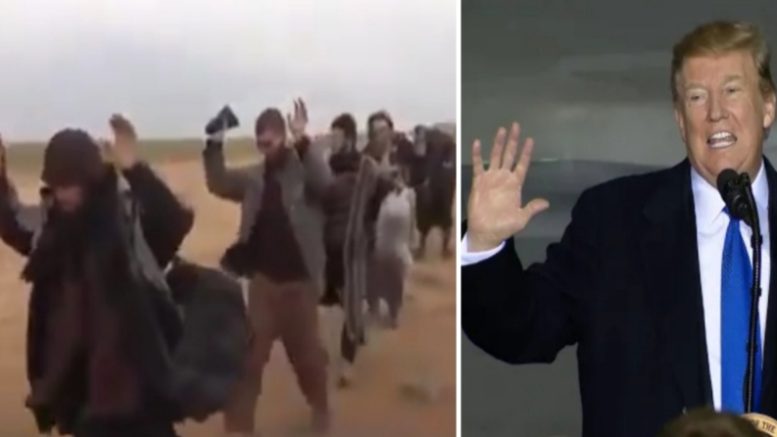 On his way back from Vietnam, President Trump made a surprise stop in Alaska, where announced that 100% of ISIS’s caliphate has been overtaken and claimed victory.

The video, which has now gone viral on multiple social media platforms, shows what appears to be hundreds of ISIS soldiers surrendering in Syria.

The men seen in the video were wearing distraught looks of defeat on their faces. They were also carrying belongings and being rounded up by other troops.

The tweeted video was follow-up to a previous tweet by BNL News that read, “US-led air strikes destroy the last ammunition storages in ISIS area in Syria. ISIS has now been totally defeated in the country of Syria.”

Then, the tweeted video of troops surrendering was captioned, “WATCH: Hundreds of ISIS fighters surrendered yesterday, as they’ve been totally defeated in Syria by US and Syrian Defense Forces.” Video Below

WATCH: Hundreds of ISIS fighters surrendered yesterday, as they’ve been totally defeated in Syria by US and Syrian Defense Forces: pic.twitter.com/2UuBjYJ7Gj