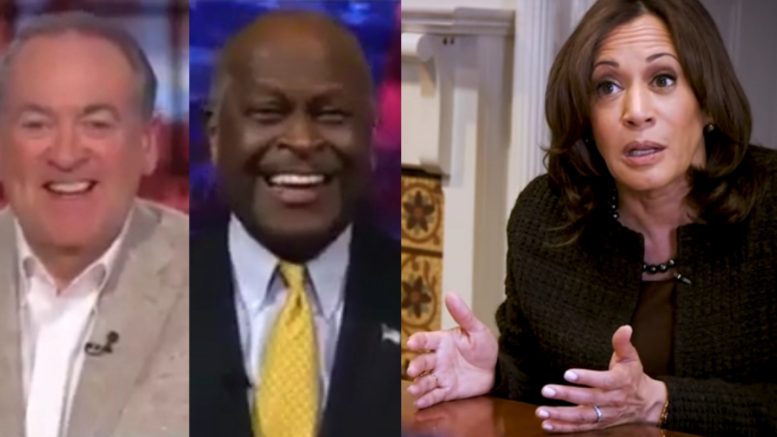 Mike Huckabee and Herman Cain joined Jesse Watters and gave their takeaways on some of the current hot topics in politics.

During their appearance, the subject of Democrat Presidential Nominee Kamala Harris was brought up and how she recently suggested that prostitution should be decriminalized.

When asked by a reporter if she thought sex work should be de-criminalized, Kamala responded, “I think so, I do.” She added, “When you’re talking about consenting adults, I think that yes, we should consider we can’t criminalize consenting behavior.”

Herman Cain was the first to vent his thoughts on Kamala’s statement. He said, “Kamala Harris, from the very she announced that she was a Democrat Presidential wannabe has taken pandering to a whole new level. She’s acting, quite frankly, kinda like Hillary Clinton did.” He continued, “Whatever she has to say about whatever hot issue comes up, she’s gonna agree with it and pander to them.”

Related Article: Kamala’s Remarks Instantly Backfire After Suggesting ‘Politicians Should Not Tell Women What To Do With Their Bodies’

Unlike Watters, Cain doesn’t believe that Kamala is a shoe-in for the Democrat Nomination because he thinks, “She’s gone too far to the flaming left.” He added, “Most of the American people are not stupid, and she is assuming that they are.” Video Below

Mike Huckabee got his turn disclose what he thought about Kamala, which he began by comparing her to a famous childhood toy. Huckabee said, “When I was little my sister had a doll called “Chatty Kathy.” You’d pull the string and it would say stuff. I think Kamala Harris has now pulled the string and she will say anything.”

Based on what she has said so far, Huckabee laid out her platform which shows she is for unrestricted abortion, open borders, getting rid of ICE and legalizing pot and prostitution.