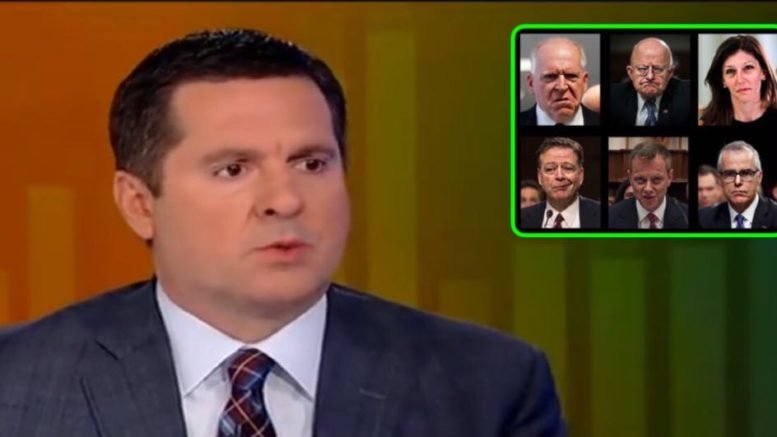 In a wide range of topics, Nunes weighed in on Michael Cohen, the dossier and what plans he is focusing on with his investigations. (Video Below)

Beginning the interview, congressman Devin Nunes touched on the Michael Cohen hearing and explained that he will further be coming back for another hearing in a classified session. “We’re not sure why he’s coming back next week, once again in classified setting, for someone who has no classified information.”

Maria pointed out the parts of Cohen’s testimony where he said he never went to Prague debunks the Steele dossier. “This is why they don’t want him outside. They want him behind closed doors so that we can’t talk about the testimony. The bottom line is: Cohen was great for Republicans. It was great for Donald Trump because we now know that the dossier was total bunk. There was no truth to it. And we know it because Cohen has testified now, publicly, that he wasn’t in Prague and there was no truth in dossier.” Nunes announced.

He added that there was no collusion, no conspiracy and no obstruction. (Video Below)

Nunes explained, “People forget this was the Democratic campaign committee working with the Clinton campaign that produced this dirt [dossier], fed it into the FBI to start this investigation. It was totally debunked this week and again next week.”

He further said that he has a list of 32 people that he wants to get testimony from and why it’s important.

“These are all names that we sent to our Republican task force in the last Congress. These names are all important, because we need to know if these people were involved in the chain of custody in the dossier. The dossier makes claims that this information came from Russians. So, all the names that are on this list that we didn’t get to last year still need to be interviewed. If we are really looking for Russian collusion, we need to know if any of those people were actually talking to Russians on behalf of the Clinton campaign or any other operative, whether it’s Fusion GPS. What Russians were they actually talking to, because these Clinton people could be the ones who were in bed with Russia for all we know. Or it could be total nonsense.” Nunes said. (Video Below)

Bartiromo named off several names on Nunes’ list that worked for Hillary Clinton.

“Why would people on the Clinton campaign tweeting out messages about Trump’s involvement with Russia? It’s because they have the dossier. They were promoting this message, this dirt, in 2016. And we need to ask these Clinton campaign people where they got it from.” Nunes asked, “Did they get it from Glenn Simpson and Fusion GPS, the dossier that they were paying for? Or did they get it from some Russian friends of theirs that they know of?”

He stated that Democrats have given Republicans zero witnesses so far. “If they continue to not give us any witnesses, we will ask all of these people voluntarily come in to Congress to talk to us. If they won’t come in, we’ll either do it through the courts, or we’ll send it over to the Senate and hope that Lindsey Graham and his team can get to the bottom of it.”

The California congressman noted that not only did they get a warrant to spy on emails and phone calls, but they opened a counterintelligence investigation into a political campaign.

He noted the final thing they have to go after is the media who was involved.

Next, they discussed the letter that Reps. Jim Jordan (R-OH) and Mark Meadows (R-NC) sent to Attorney General William Barr requesting information about the actions of two high profile prosecutors on the Special Counsel’s team.

Meadows and Jordan want to know about the actions of two senior members of the Special Counsel’s Office, Andrew Weissmann and Zainab Ahmad, and their knowledge of the information in the in the Steele Dossier in 2016.

(The letter can be read here: Men On A Mission: Meadows & Jordan Target Mueller’s Team In Their Latest Letter To Barr)

Meadows and Jordan requested to have the information as soon as possible, but no later than 5:00 p.m. on March 15, 2019.

Nunes said, “These two individuals that Mark Meadows and Jim Jordan are asking about were involved in the chain of custody of important evidence of the dossier, the dirt from the Clinton campaign that is the basis for this entire hoax!”

“Weissmann and Ahmad are not independent. They were in on it from the beginning. They knew about the dossier. They brought this dossier forward.” Nunes further added, “Lets not forget, Weissman at one time, was meeting with reporters.”