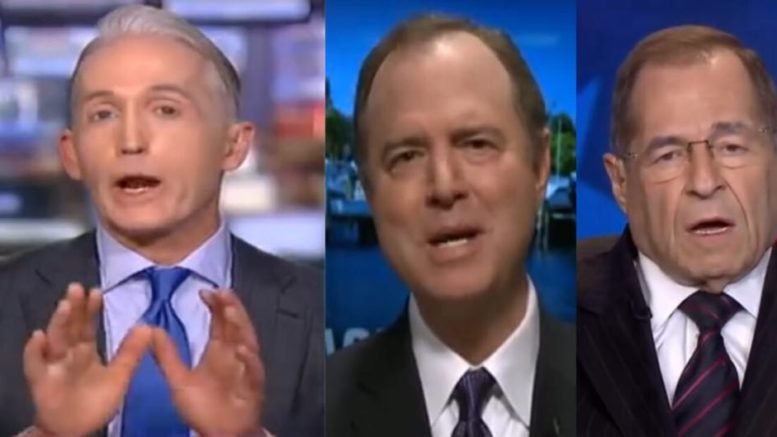 Fox News contributor and former South Carolina Congressman, Trey Gowdy, joined “Fox and Friends” Monday morning where he weighed in on the new House investigations that Democrats have up their sleeves.

This comes amid Democrats using President Trump’s former lawyer, Michael Cohen, as their puppet to “search for crimes.” (Video Below)

On Sunday, House Judiciary Chairman, Jerry Nadler, announced that he is submitting over 60 document requests to the White House and Department of Justice.

Nadler claimed in an interview on Sunday, “It’s very clear that the President obstructed justice” and this latest round of document requests is concocted to help Democrats build a case proving “obstruction of justice, corruption and abuse of power” by the President.

Further, Senator Mark Warner (D-VA) suggested, “There’s no one that can facutally say there’s not plenty of evidence of collaboration or communications between Trump organization and Russians. Rep. Adam Schiff (D-CA) also claimed on Sunday, “I think there is direct evidence in the emails from the Russians through their intermediary offering dirt on Hillary Clinton as part of what is described in writing as the Russian government effort to help elect Donald Trump.” (Video Below)

Democrats are still clinging to their Russian collusion delusion with “plenty of evidence”, but Gowdy shot back and said, “If you listen to Adam Schiff and Mark Warner over the weekend, the brand new conspiracy or collusion evidence they have… the brand new thing they have is an email from two years ago!”

Gowdy further pointed out that Hillary Clinton was the Secretary of State, a U.S. Senator, and a first lady. “So if she had dealings with Russia, I would think that we would already have that on our side. I would think you would not need to get that from Russia. The other point is this: if getting negative information from Russia is tantamount to a crime, then whoever dealt with Christopher Steele, needs to go hire a lawyer!” (Video Below)

Brian Kilmeade pointed out, “Or, whoever accepted the Clinton Foundation money from Russia, the $700,000 speaking fee…” Then he declared, “That’s Bill Clinton!”

When asked about the hearing and testimonies from Michael Cohen, Gowdy said, “I think what we’ve learned from this past week is how utterly useless public congressional hearings are. And this notion that you can unlock important information in five minute increments… I think the two closed door sessions this past week on the Senate and House side with the Intelligence Committees were very helpful. I think that’s why they’re bringing Cohen back.”

Gowdy pointed out that John Ratcliffe will get Cohen to distinguish the Trump he described in his book transcript verses the one he described before Congress. “The closed door hearing are actually constructive. You get an hour to ask questions as opposed to five minutes.”

When asked if he thinks Congress is less interested in getting to the bottom of it and more interested in making Donald Trump look bad over the next two years until election day, Gowdy replied, “Well let me ask you this: what serious finder of fact can you name that identifies information in five minute increments and does it on television?”

(Related: Trey Gowdy Reacts To Key Aspects Of The Cohen Hearing: ‘The Real ‘Wow’ Was [The Media’s] Reaction When Repubs Were Accused’)

After Steve Doocy said he’s tried to do it in the past, Gowdy declared “And I was an utter unmitigated failure, which is why in one investigation I ran we interviewed 103 people, 102 of them were done behind closed doors. Only one was done publicly and that didn’t go very well.”(Video Below)

Kilmeade said, “I can’t believe they are allowed to go after the way [Trump] financed different opportunities, they’re willing to go after Deutsche bank, his tax returns, Felix Sater, his CFO, his sons, his daughter. They’re all gonna be called up. Why is that allowed?”

Then Gowdy asked, “Remember when Nadler and Schiff didn’t want to interview with ongoing investigations? Does anybody remember that? They no longer have that concern. So, this is all about 2020. They can ask for it, but the Presidents got really smart lawyers, and I’d be shocked if they produced it.”

Co-Host Jedediah Bila pointed out that the media will regardless paint the picture that if people don’t show up, “you’re trying to hide something.”

“The media is going to do that regardless. You just played a clip of Jerry Nadler saying the President commited a crime. Did you hear that cracker jack reporter follow up with a ‘okay, list all the evidence. Who’s your first witness?'”

Gowdy wondered, “Who’s the first witness you’re gonna call in an obstruction of justice case for the firing of Jim Comey? Are you going to call all the Democrats in 2016 who thought he should be fired? Is that going to be your witness list?” (Video Below)

(Related: Trey Gowdy Wrecks McCabe’s Accusations Against Trump: ‘Why Did You Tell CBS & Not Congress?’)