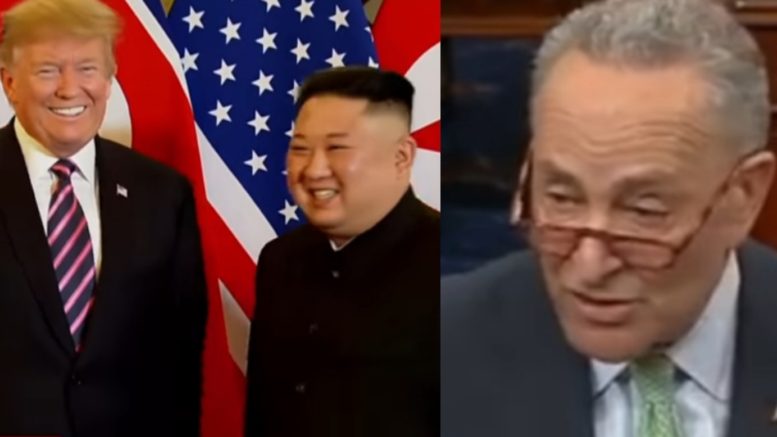 Many critics from the left considered Trump’s summit with Kim as a failure when he walked away from the negotiation table without making a deal. Schumer, however, struck a different tone when speaking on the Senate floor.

Schumer took a moment during his speech to lightly commend President Trump for showing strength by not striking a deal with North Korea unless it worked out in America’s benefit.

He said, “So I say to President Trump, you stay tough in North Korea, and it’ll work to your benefit. Democrat leader of the Senate praised Trump for doing that.”

Related Article:  Lindsey Graham Blasts Trump’s Critics Ahead Of Second Summit: ‘How Well Did Things Go On Your Watch?’

Schumer proceeded to give advice on how to handle China moving forward. He said, “Stay tough on China. Don’t let March be the month, when it comes to China, when it is said that Trump went in like a lion and went out like a lamb.” Video Below

Following talks in Vietnam, Trump ensured Americans that a deal is still in the works and his relationship with Kim is still good but more time is needed. See Below

We leave you with Trump’s statements on North Korea and China talks via Twitter:

Great to be back from Vietnam, an amazing place. We had very substantive negotiations with Kim Jong Un – we know what they want and they know what we must have. Relationship very good, let’s see what happens!

I have asked China to immediately remove all Tariffs on our agricultural products (including beef, pork, etc.) based on the fact that we are moving along nicely with Trade discussions….

….and I did not increase their second traunch of Tariffs to 25% on March 1st. This is very important for our great farmers – and me!