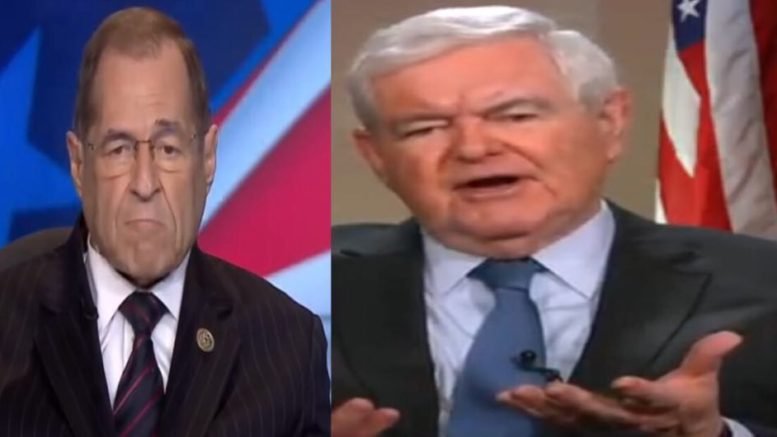 Former Speaker of the House, Newt Gingrich, joined Fox News Monday, where he weighed in on Jerry Nadler’s (D-NY) document request into another Trump probe.

Newt pushed back at Democrats and suggested they are focusing too much on targeting President Trump. (Video Below)

On Sunday, House Judiciary Chairman, Jerry Nadler, announced that he is submitting over 60 document requests to the White House and Department of Justice.

Nadler claimed in an interview, “It’s very clear that the President obstructed justice” and this latest round of document requests is concocted to help Democrats build a case proving “obstruction of justice, corruption and abuse of power” by the President.

(Related: James Woods Reacts To Nadler’s Doc Request: ‘When Will The Pansy A–ed Repubs Fight Back?’)

This is all part of a new widespread investigation designed by the Democrats in hopes of turning up dirt on President Trump. And it all comes as Robert Mueller’s probe is expected to come to a close without finding any evidence of Russian collusion with the Trump campaign. This tactic by Nadler is the latest of several dirty tricks used by Democrats in an effort to persuade the public that President Trump needs impeached. (Video Below)

Newt Gingrich was asked during the interview if Democrats can draw blood and Newt fired back saying, “They may draw some blood, but the problem they got is everytime they go to a new topic, a new argument, a new charge, it looks more and more phony.”

“The Democrats right now are absorbing all of their energy right now into two things: Donald Trump, who they hate and the rise of their left wing activist.” He added, “And that means they have no space left to communicate a winning Democratic party message for 2020.”

Further, Gingrich slammed Democrats for conducting their hearing with Michael Cohen at the same time President Trump was overseas trying to make a deal with Chairman Kim Jong Un.

“When you put a proven, convicted liar on national television at the same moment the President of the United States is negotiating over nuclear weapons in North Korea, you give the country a vision of a party that’s almost destructive of America for their own partisan reasons.”

(Related: With A Single Poll, Newt Buttons Up All Never Trumpers Who Sense The President Is In Trouble)