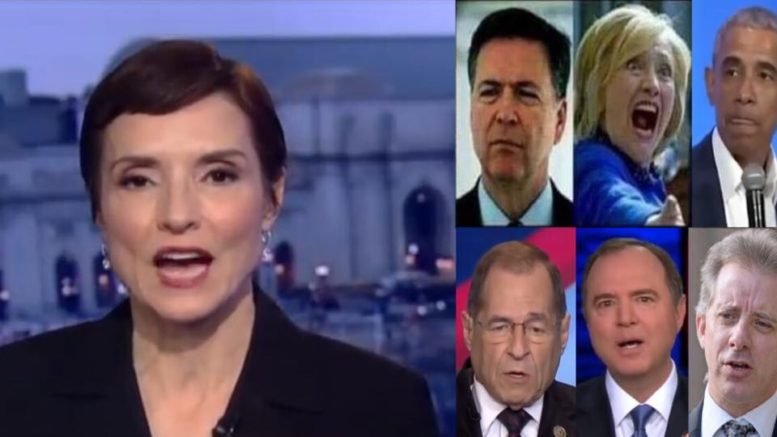 Nadler made a stunning political move on Monday, as he issued over 80 document requests on people tied directly to President Trump. Some of the people he is reported to have targeted include those who have already been questioned by either Congress or the Special Counsel.

Chief intelligence correspondent, Catherine Herridge, explained the situation at hand, but she revealed a game changer that would expose the Democrats dirty tactics. (Video Below)

While Democrats try to pursue phony investigations, several Republicans are coming forward firing back at their motives as “all political” and “laying the groundwork for their impeachment process.”

Catherine Herridge explained now that Democrats have the gavel and subpoena power, they are launching wide-range investigations that go far beyond Russia. “Republicans say it’s not a search for the truth, but an effort to damage the President through lengthy and methodical public hearings.”

Rep. Jerry Nadler (D-NY) claimed on Sunday, during an interview on ABC’s “This Week”, “We can’t depend on the Mueller investigation.” He further said “He didn’t know when it was ending and that it was only focused on certain crimes.”

In a nutshell, Nadler is going beyond the scope of the Mueller investigation in “search of crimes” to target the President Trump and anyone surrounded or affiliated with him. (Video Below)

Herridge further explained that congressional Republicans said the wide-ranging investigations are about 2020 and accused Democrats of shifting the goalpost now that they believe the Russia collusion conspiracy is apparently bare. (Video Below)

Rep. Devin Nunes (R-CA) said on Monday, during an interview on Fox News, “The investigation is changing, developing. So, we’ve been investigating collusion and obstruction, clearly they’ve left that far behind. They’ve already written off Mueller.”

However, Herridge exhibited a game changer that is stemming from the unsealed Steele documents.

“Republicans are focusing on the anti-Trump dossier after a Florida judge ruled from a deposition from it’s author, former British spy, Christopher Steele, can be unsealed.” She announced.

Further Herridge stated, “Those records are expected to reveal how the Democrat funded opposition research came through multiple unofficial channels in the FBI in an effort to lend credibility. The issue has already got traction in the Senate where Republicans maintain control.” (Video Below)

The dossier was used by the US intelligence community to obtain a FISA surveillance warrant on Trump campaign aide Carter Page – along with anyone he was in communication with. Steele’s report claimed that there was a “well-developed conspiracy of co-operation” between the Trump campaign and the Kremlin.

The reports, which circulated among U.S. intelligence officials beginning in the summer of 2016 and were later published by BuzzFeed, helped set off a chain of events that led to the appointment of special counsel Robert Mueller. In the years since Steele authored his reports, evidence has emerged of extensive contacts between Trump’s aides and various Russian state-aligned actors, while many of the most salacious allegations in Steele’s reports remain unconfirmed or at least partially debunked. –Politico

(Related: Herridge Discloses How Sen. Graham Can Pry The Truth From Fmr. Obama Officials: ‘[Put Them] Under Oath’)