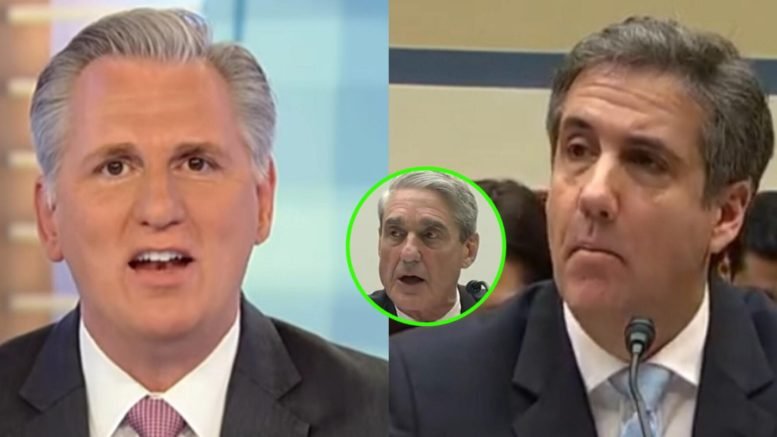 McCarthy primarily focused on conflicting behavior by Rep. Adam Schiff (D-CA) and the motives for why Democrats are pushing forward on their Presidential harassment tactics. But, the most compelling part came when he discussed how Michael Cohen’s public testimony shattered the “foundation” that Robert Mueller’s probe was built on. (Video Below)

Rep. Kevin McCarthy began by pointing out Adam Schiff’s conflicts of interest and laid out questions he wants Schiff to answer.

“Schiff laid out a few years ago anyone that shows a conflict of interest or disbelief in it has to recuse themself.” McCarthy was referring to Adam Schiff when he said that Devin Nunes (R-CA) needs to recuse himself.

“A couple questions for him: Schiff, when we were trying to find out who paid for this dossier, he fought, so we could not find out– it was the Democrat party that paid the Russians– for the Dossier. Then, now we find out that Schiff met with Glenn Simpson, who’s the cofounder of Fusion GPS. And Nellie Ohr, the wife of [Bruce] Ohr who worked at the Justice Department. And at the time he met with him, the committee wanted to relook at him based upon the testimony Glenn Simpson had given.” He explained.

“So did Schiff talk to Simpson about that– what the committee wanted to look at?” McCarthy asked. (Video Below)

McCarthy further pointed out that Schiff talked to Michael Cohen ahead of his testimony on Capitol Hill last week.

(Related: During The Hearing, Jordan Grills Out Schiff’s Involvement In Cohen’s Testimony: ‘What Did You Talk To Mr. Schiff About?)

“We want to know did staff meet with him? Did he tamper with the witness? Did he try to direct the witness? How many times did they meet? What did they talk about? (Video Below)

“The other thing that’s very interesting is when Glenn Simpson came before committee, you know what Adam Schiff did at the end? He asked Glenn Simpson to direct the committee on where they should go with the investigation.” McCarthy revealed.

“Adam Schiff is a modern day ‘Joe McCarthy.’ Somebody who claims something and never has delivered. But the one thing he has delivered on: protecting Fusion GPS. He didn’t want us to know that the Democrats paid for the Russians to have this false dossier. He protected Glenn and met with him and others did not know. And then, he tells him that committee is concerned about his own testimony.” He said.

The House Minority Leader then laid out what he believes debunks Mueller’s witch hunt.

“Then, the most outrageous thing I found in that whole Michael Cohen hearing– remember why this whole Mueller investigation is going forward: this whole thing of collusion… it is all based upon the believe that Michael Cohen went to Prague to meet with the Russians. Michael Cohen said he did not. So, the foundation of even why we are in the investigation in the first place has been thrown apart!” He declared. (Video Below)

McCarthy also pointed out that Democrats are starting to denounce the Mueller investigation, because they know there is no collusion.

“So they are saying ‘we don’t have to worry about that; we need to start our own.'” He added, “And, [they are] just throwing mud anywhere they go. We have to stop calling them the Democratic party, because I’ve never seen it this poisonous, this toxic, and there’s no other way to say it than a socialist.”