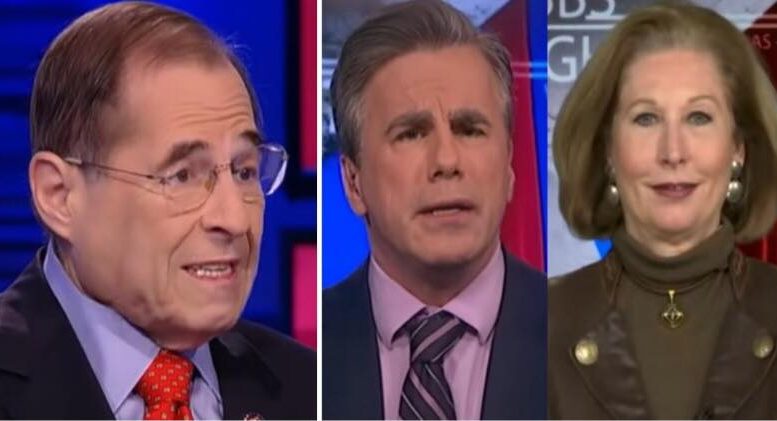 Nadler made a stunning political move on Monday, as he issued over 80 document requests on people tied directly to President Trump. Some of the people he is reported to have targeted include those who have already been questioned by either Congress or the Special Counsel. (Video Below)

During the interview, Tom Fitton and Sidney Powell both issued warnings to those who were targeted not to comply with Nadler or any Democrats’ request, as they feel it is all a continuation of the ‘coup attempt’ against President Trump.

Powell began by saying, “It is an unprecedented assault on this President, and the Democrats should be very leary of what they’ve started here. It’s going to backfire on them in more ways than one. And things have a way of going around and coming back around.”

When asked what President Trump and his administration should be doing after Democrats have put in their faces what they are going to do and how they are going to go about it, Powell suggested, “They need to be looking at motions to quash all the subpoenas and fighting them every way they possibly can. Anyone who testified before Congress previously or before Mueller, should not be testifying in front of them again.”

Fitton agreed and announced, “The easiest answer is ‘to just say no!'” He explained, “These are redundant requests. The documents are around elsewhere that the Congress can get if they desperately need them.” (Video Below)

Fitton fired back at Democrats calling it an abuse of power. “This is all part of the piece. You had Obama target the IRS to use his opposition in 2012. Then, they used DOJ, FBI, CIA and ect. to target President Trump or then, candidate Trump. They continued the targeting and abuse through the Mueller operation, and now, the abuse is being continued. The coup is being continued through this abusive use of congressional power to harass the President and all of his people.”

Fitton further explained that a lot of the people being targeted cannot afford lawyers, but Powell pointed out that Republicans could “certainly start a legal defense fund” for them. (Video Below)

“Nadler admitted he had nothing to go on. To say you have no facts of evidence of a crime warranting impeachment, and then launch an investigation anyway is the exact reverse order of how our system is suppose to work. It’s a remarkable abuse of power!” Fitton expressed.

Lou Dobbs asked, “Are you saying the witch hunt had it in reverse order? I mean it’s just been a search for a crime? They’re following the lead of Robert Mueller and the radical Dem corruption of both the FBI and the Department of Justice.”

Fitton agreed and jokingly said, “It’s rare you get an admission that they’re doing it.”

He pointed out that Mueller has “come up dry” in finding any Russian collusion which is leading the Dems and Nadler in seeking to abuse the law, further to move on to other things such as get the President’s private tax returns.

“Not only will they be abusing these individual citizens, abusing the power of Congress, they are going to try to bring in the IRS to try and abuse President Trump as well.” Fitton said. (Video Below)

Lou Dobbs is fed up with Republicans that are letting Democrats run hay wild and abuse their power. He fired off and asked, “What are the Republicans in Congress doing? What is the Senate doing? Why isn’t there a response from the Republican party and their representatives, whether it be in the Senate or the House?”

After Sidney suggested that we need to vote out absolutely every RINO, Dobbs threw up his hands up in the air in disgust, and then he laid down the hammer. “I don’t want to talk about 2020, I really don’t. I want to talk about what these lazy, ingalent, passive, son-of-a-guns can’t do to respond what is a clear declaration of war on the part of the radical dems against the President and the American Republic!” Dobbs proclaimed.

Sidney proposed that the Senate can do investigations of their own, but pointed out they are not doing anything yet.

Fitton chimed in and said, “You know, it was announced today that Nadler coordinated with the Mueller operation in the southern district of New York which is being run by Deep Stater’s on this investigation. So, the collusion continues, and Senator Lindsey Graham, he’s got to take ownership of this and proceed to investigate the Justice Department and the FBI corruption behind the Trump targeting.” (Video Below)

(Related: Fitton Indicates Why Mueller Has No Business Writing A Report On Trump: ‘We Already Have One Corrupt Dossier’)