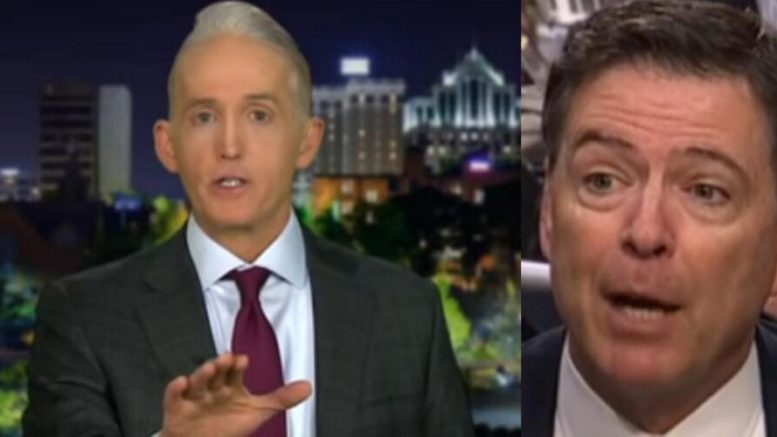 Comey, on Monday weighed in on the pending report from Special Counsel Robert Mueller, urging transparency in the handling of the probe’s final results. (Video Below)

In an Op-Ed for The Washington Post, Comey wrote that “transparency is especially important where polarized politics and baseless attacks challenge law enforcement’s credibility.

“In critical matters of national importance, a straightforward report of what facts have been learned and how judgment has been exercised may be the only way to advance the public interest,” he continued.

Comey went on to list examples, in his estimation, in which the Justice Department shared detailed information with the public. He specified the 2014 killing of Michael Brown by a police officer in Ferguson, Missouri and the October 2015 instance in which the Justice Department publically shared information about the IRS allegedly targeting tea party groups, as worthy reasons for the DOJ to speak out, according to Fox News.

“These cases represent the way the Justice Department has always approached its mission– speak only in prosecuted cases, unless the public really needs to know,” Comey wrote. (Video Below)

Comey argued that Democrats were wrong for fighting transparency in 2016 in regard to the DOJ’s handling of the Hillary Clinton email investigation. But now, Comey wrote, the GOP is at fault for allegedly battling against fully releasing the Mueller probe results.

“It is hard to imagine a case of greater public interest than one focused on the efforts of a foreign adversary to damage our democracy, and in which the president of the United States is a subject,” Comey said.

“I don’t know all the considerations that will go into deciding precisely what to say about the completion of the special counsel’s work and when to say it. It’s always important to consider guidelines and routines. But don’t listen to those who tell you transparency is impossible. Every American should want a Justice Department guided first and always by the public interest. Sometimes transparency is not a hard call.” He wrote. (Video Below)

“Ultimately, I hope the report is released, consistantant with classification.” He added, “I don’t want any classified information out there; I don’t want Grand Jury material.”

“But, there’s a third point too, and Comey did this in July. He held a press conference and laid out all the evidence he had on someone that he wasn’t going to indict. The Department of Justice does not speak through press conferences. They do not speak through reports, they speak through indictments.” Gowdy further explained in detail, “So on the criminal side, if you have enough, issue an indictment. On the counterintelligence side, if you have information about what Russia did in 2016, release that, as much as you can, but don’t conflate the two.”

McCallum agreed and then asked, “It’s also interesting to remember that Rod Rosenstein based the memo on which James Comey was fired, in part, on exactly what he did that day, on July 5th, correct?”

Gowdy responded, “So did Michael Horowitz. Michael Horowitz is as straight as an arrow as you will find in Washington. And the Inspector General took great exception into the way Jim Comey… just like in his Op-Ed. I mean, he does it all the time.”

He added, “He thinks he’s the artibutor and author of the rules, and he’s not. You cannot besmurge people’s reputations. The Department of Justice cannot do it at a press conference or a report. If you have enough information, indict them. He didn’t have enough to indict Hillary Clinton; he didn’t think. So, he held a press conference that was even worse than a trial, because she doesn’t have a chance to defend herself.

(Related: In A Fierce Statement, Trump Reacts To FBI’s Investigation Over Comey’s Firing: ‘He Was A Crooked Cop’)