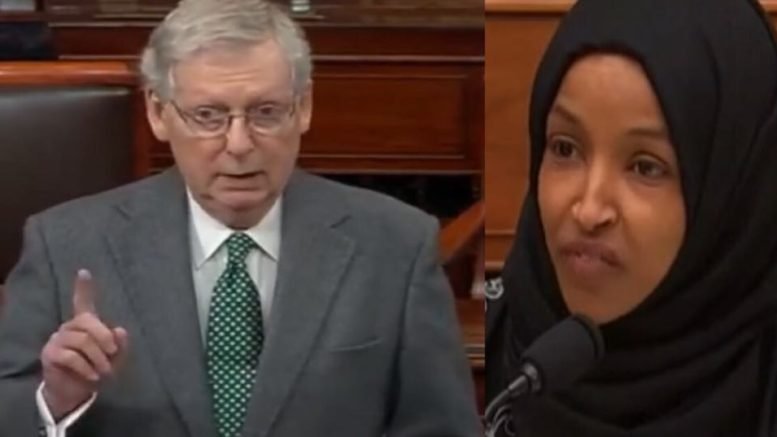 Rep. Ilhan Omar (D-MN) is in hot water again after she recently made yet again, a number of anti-semitic remarks suggesting Wednesday night that some politicians in Washington are “pushing for allegiance” to Israel.

Some lawmaker are calling for her to be removed from the foreign affairs committee. Further a House vote on a resolution condemning anti-Semitism has been delayed, as Democrats scramble to rewrite the motion to include all forms of prejudice.

According to Fox News, the resolution originated after Omar – for at least the second time in recent months – ignited an uproar for echoing anti-Semitic tropes. In February, she suggested on Twitter that supporters of Israel have been bought. The congresswoman then accused American supporters of Israel of pushing people to have “allegiance to a foreign country.”

The resolution in the House – which doesn’t mention Omar by name – was initially set to be introduced Wednesday. It was intended to say the House “rejects anti-Semitism as hateful expressions of intolerance that are contradictory to the values that define the people of the United States.”

Senate Majority Leader Mitch McConnell called out Speaker Nancy Pelosi (D-CA) along with Omar  on the Senate floor. He also blasted her on twitter Wednesday.

He wrote, “Our relationship and support for @Israel is built on common values and democratic principles. On shared interests, close partnerships, and deep friendships. The members of the Senate support Israel because so many Americans support Israel.” (Continued Below)

McConnell added, “Racial and religious hate mongering deserves swift condemnation. I’m glad the House of Representatives is taking up a resolution to reject antisemitism. But I’m sorry it had to be prompted by the repeated invocation of hurtful stereotypes by a Democratic member of the House.”

When speaking on the Senate floor Wednesday, McConnell said, “Remarkably, Mr. President, for the second time in the last three weeks, Speaker Pelosi apparently feels compelled to have her members vote on a resolution that would reportedly condemn anti-semitism.” He reiterated that fact that Democrats feel they need to have a resolution.

“Unfortunately again, for the second time in just the last three weeks, this seems to be in response to the invocation of crude, hateful and backwards anti-semitic stereotypes by one specific freshman member of the House Democratic majority.” The Senate Leader explained. (Videos Below)

McConnell added, “This Democratic congresswoman already stoked controversy in mid-February, having publicly proclaimed that Israel’s supporters are only in it for the money. Apparently she believes the only reason leaders would stand with Jewish people and the State of Israel is Jewish money. Well, I think we’ve all heard that kind of talk before, and we must not tolerate it.” He noted, “It’s deeply felt all across America.”

“Our relationship is built on common values and democratic principles: our close interests, our partnerships and deep friendships. The support for Israel that you see in this chapter in this chamber is not the work of some shadow conspiracy. The members of this body support Israel because so many Americans support Israel.” He proclaimed.

“I’d hope this regrettable episode might have caused this lawmaker to be more careful with her language, but alas, just a few weeks later, here we are again; more anti semitic tropes. This time she claims that supporters of Israel have actually ‘an allegiance to a foreign country.’ That’s the old, ugly duo loyalty smear, Mr. President. Plain as day.” McConnell said.

“So now the House of Representatives seems to distance itself from this members remarks and will apparently soon vote to condemn anti-semitism for the second time in just a few weeks. Well, I hope this time the message is clear. Support for Israel isn’t about the Benjamins. It’s about the hearts and minds of the American people. He added, “And it’s unconscionable for any member of the United States Congress, even less a member of the House Foreign Relations Committee to repeatedly traffic in base stereotypes.” (Videos Below)

What’s more, Fox News’ Peter Doocy caught up with Ohmar on Wednesday and tried to ask her a few questions. Omar ignored the question, as well as others about whether she would support the House resolution condemning anti-Semitism that has been delayed because of disagreement among Democrats over its language.

“Rep. Omar, there seems to be some confusion among your colleagues. Are you anti-Semitic?” Fox News asked Omar.

Watch the two short clips below: First Leader McConnell, then the next video shows Omar dodging and running.

Our relationship and support for @Israel is built on common values and democratic principles. On shared interests, close partnerships, and deep friendships. The members of the Senate support Israel because so many Americans support Israel.

Racial and religious hate mongering deserves swift condemnation. I’m glad the House of Representatives is taking up a resolution to reject antisemitism. But I’m sorry it had to be prompted by the repeated invocation of hurtful stereotypes by a Democratic member of the House.