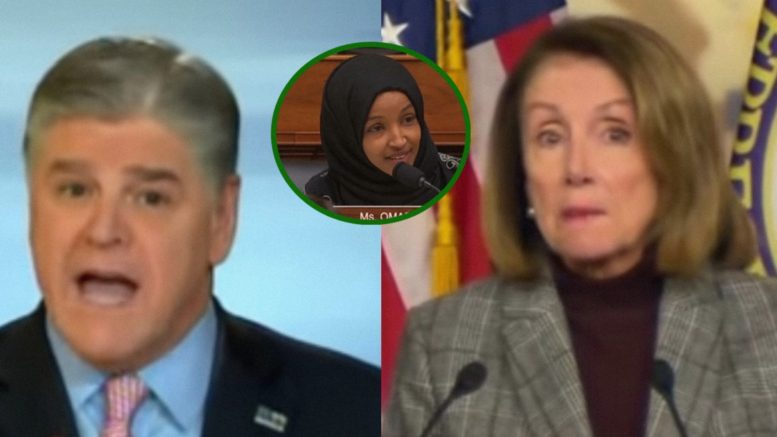 Representative Ilhan Omar made headlines after, once again, being accused of making more anti-Semitic remarks. It is the second time since joining Congress that Omar has been the center of controversy over her outspokenness towards Israel.

While nearly a dozen pro-Israeli groups are calling on Omar to be removed from the Foreign Affairs Committee, House Speaker Nancy Pelosi is showing no signs of taking a stand against the controversial freshman representative. Sean Hannity has a good idea why.

Hannity pointed out that Pelosi is “scared” of condemning Omar, primarily because Alexandria Ocasio-Cortez and other radicals within the party rushed to defend Omar.

He cited a statement tweeted out by  Ocasio-Cortez that read, “And don’t even get me started on misogyny.  If we called resolutions on sexist statements, a good chunk of Congress would be gone.”

She added, “To jump to the nuclear option every time leaves no room for corrective action. So I ask *everyone* that we practice calling in before calling out.”

With that being said, Hannity declared, “Without a doubt, House Speaker Pelosi is terrified of, yes, being overthrown by even more radicals within her own party.” Video Below

Further, he concluded, “It’s pretty safe to say that the real Speaker of the House for Democrats is Ocasio-Cortez, not Nancy Pelosi. She’s calling the shots.”

Hannity then gave examples of how this “apathy” towards bigotry and sexism is nothing new in the Democratic Party. Video Below