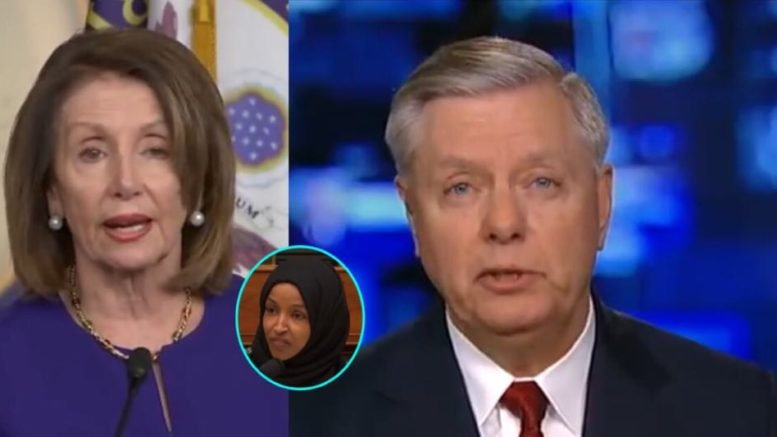 Sen. Lindsey Graham (R-SC) joined host Sean Hannity on Fox News Wednesday where he weighed in on the radical left and why they won’t condemn anti semitism.

This comes amid Rep. Ilhan Omar’s remarks toward Israel and the backlash she is facing. (Videos Below)

Sen. Graham suggested that the leaders in the Democrat party are “afraid of the radical left” to which they won’t condemn anti semitism.

“This is going on all over the world, not just in the United States. The Labor Party in Great Britain is becoming more anti semitic by the day. Israel is the bad guy, Palestinians are the oppressed. Israel gets rockets fired into Israel from Gaza by Hamas. Graham explained, “They never say a word; they blame Israel when they fight back.”

“They’re afraid not to impeach the President, they’re afraid of not getting a primary. They got a billionaire running against any Democrat who won’t vote for impeachment. They got the radical left threatening to have a revolt inside of the Democratic party if you stand up against anti semitism, because they hate Israel so much. That’s pretty odd.” He continued. (Videos Below)

On Thursday during a press conference, House Speaker Nancy Pelosi defended Ilhan Omar after a delayed announcement and pressure from inside her party.

The Speaker said, “I feel confident that her words are not based on any anti-semitic attitude. But she didn’t have a full appreciation of how they landed on other people where these words have a history and cultural impact that might have been unknown to her.

Pelosi, who last month demanded an apology from Omar over previous anti-Semitic statements, in the wake of subsequent statements, is now saying “it’s up to her” whether to apologize. She also explained how important it was that a House resolution condemning anti-Semitism doesn’t mention Omar and in fact addresses other forms of hate, reported Washington Examiner. (Videos Below)

Washington Examiner further noted the reality is that the base of the Democratic Party, and an increasing number of elected Democrats, have a significant level of tolerance for anti-Semitism, which they often attempt to launder as mere criticism of Israel. There was a huge backlash against any attempt to sanction Omar, and many rallied to her defense. Pelosi is terrified of the resurgent Left. And so, she did what many leaders throughout history have done in the face of spreading anti-Semitism: She threw Jews under the bus.

President Trump wrote on Twitter Wednesday, “It is shameful that House Democrats won’t take a stronger stand against Anti-Semitism in their conference. Anti-Semitism has fueled atrocities throughout history and it’s inconceivable they will not act to condemn it!”

It is shameful that House Democrats won’t take a stronger stand against Anti-Semitism in their conference. Anti-Semitism has fueled atrocities throughout history and it’s inconceivable they will not act to condemn it!

"I feel confident that her words are not based on any anti-semitic attitude," Pelosi said. "But she didn't have a full appreciation of how they landed on other people." https://t.co/QWQcX1wDSi pic.twitter.com/KnGQAFfrQX

(Related: While In Poland, Pence Puts His Foot Down On Omar’s Anti-Semitic Remarks, Suggests She Face Consequences)