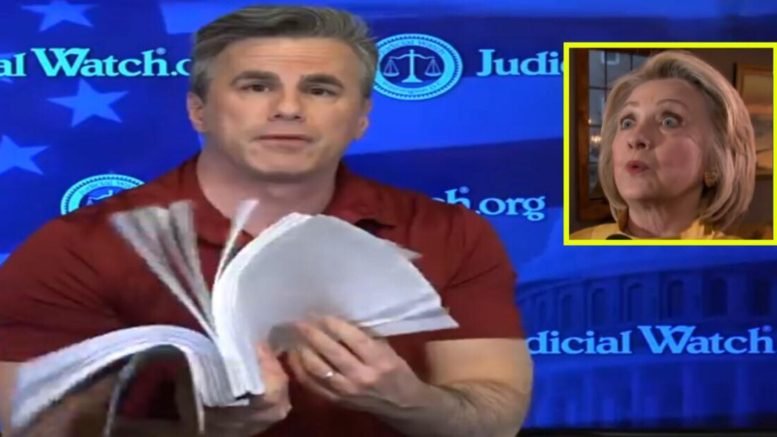 President of Judicial Watch, Tom Fitton, is fighting for the American people, and he continues to do the heavy lifting exposing the truth.

Fitton revealed he has breakthrough progress on the Clinton email scandal that he has been pursuing for quite a while. (Video Below)

In 2016, Clinton was required to submit under oath written answers to Judicial Watch’s questions. Clinton objected to and refused to answer questions about the creation of her email system; her decision to use the system despite warnings from State Department cybersecurity officials; and the basis for her claim that the State Department had “90-95%” of her emails, according to a press release from Judicial.

However, in November, Judge Sullivan ruled that Hillary Clinton must address two questions that she refused to answer under-oath.

In December, a Federal Judge ordered discovery (as a pre–trial procedure in a lawsuit) into Hillary Clinton as a result of a lawsuit filed by Judicial Watch regarding Benghazi.

Judicial Watch reported, “in a ruling excoriating both the U.S. Departments of State and Justice, U.S. District Court Judge Royce C. Lamberth has ordered both agencies to join Judicial Watch.” (Video Below)

Further, “they must join in submitting a proposed schedule for discovery into whether Hillary Clinton sought to evade the Freedom of Information Act (FOIA).” The Judge wanted to know if Clinton evaded “by using a private email system and whether the State Department acted in ‘bad faith’ by failing to disclose knowledge of the email system.”

Lamberth ruled the Court orders the parties to meet and confer to plan discovery into: (a) whether Hillary Clinton’s use of a private email while Secretary of State was an intentional attempt to evade FOIA; (b) whether the State Department’s attempts to settle this case in late 2014 and early 2015 amounted to bad faith; and (c) whether State has adequately searched for records responsive to Judicial Watch’s requests.”

Fitton announced he has an update on the email scandal, “the scandal that we’re not allowed to talk about,” and he revealed it is the reason we have the ‘Russiagate scandal.” (Video Below)

The Judicial Watch President explained, “Hillary Clinton was facing serious criminal consequences potentially for her email misconduct. What better way to get out from under them than to have the Justice Department and the FBI target her political opposition and have partisans friendly to her harass the President through the DOJ and FBI?”

Fitton said that the court is allowing his team to reach further for discovery, because they didn’t want to tell the courts and the American people about it.”

Further, Fitton proclaimed that he gets to ask questions about the Benghazi scandal and the Clinton email scandal.

“Was her system set up to thwart the FOIA? Was there an effort to hoodwink the court — to get the court to shut it down before they or we found out about the Clinton email issue?” He asked. “And the court also wants to know was the search adequate.” (Video Below)

“We have discovery that’s going to take place over the next few months. Discovery means evidence gathering. It means bringing people under oath and questioning them in person.” Fitton declared, “We have ten depositions scheduled over the next several months!” [Emphasized]

He noted Judicial Watch will be submitting questions to Susan Rice, Bill Priestap, Jake Sullivan and one of Hillary Clinton’s lawyers.

Seven other top State Department/Clinton aides that must also respond to Judicial Watch queries can be read [HERE].

Then, Tom Fitton dropped another bomb. “When all of this over, we may have the opportunity to make the case, if we want, to question Hillary Clinton under oath!” Fitton revealed.