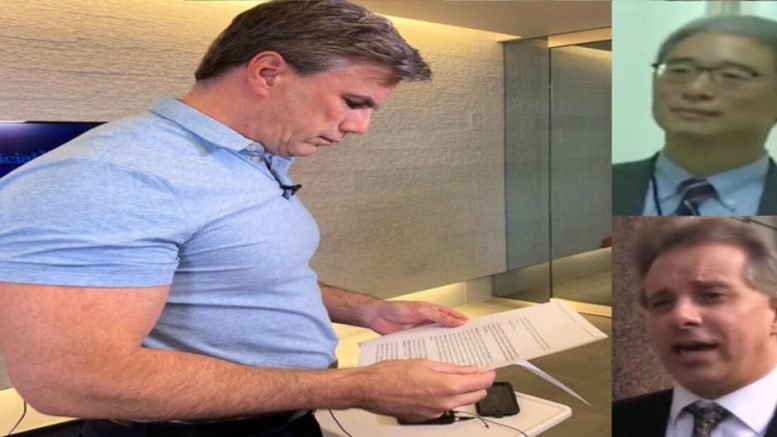 Judicial Watch is doing a lot of heavy lifting unveiling the truth for the American people.

In a new press release, Judicial Watch uncovered 339 pages of heavily redacted DOJ records that show former Associate Deputy Attorney General Bruce Ohr had numerous communications with Fusion GPS and Christopher Steele. Judicial Watch notes emails between Bruce Ohr and Steele were heavily redacted, including some of the dates they were sent and received.

Judicial Watch announced Thursday that they received a whopping 339 pages of heavily redacted records from the DOJ that reveal Bruce Ohr continued to engage in ongoing contact with former British spy and Fusion GPS contractor Christopher Steele after he was fired by the FBI in November 2016 because he told the media his position as an FBI confidential informant.

The records show that Ohr served as a go-between for Steele by passing along information to “his colleagues” on matters relating to Steele’s activities. Ohr also set up meetings with Steele, regularly talked to him on the telephone and provided him assistance in dealing with situations Steele was confronting with the media, according to Judicial Watch.

Judicial Watch obtained the records through a March 2018 Freedom of Information Act lawsuit filed after the Justice Department failed to respond a December 2017 request Judicial Watch v. U.S. Department of Justice (No. 1:18-cv-00490)).

Judicial Watch’s press release further states the timeframe for the requested records is January 1, 2015, to December 7, 2017.

The documents also show that Nellie Ohr sent numerous emails and reports to Bruce Ohr and other Justice Department officials on Russia issues, per JW. (Continued Below)

He added, “These documents leave no doubt that for more than a year after the FBI fired Christopher Steele for leaking, and for some 10 months after Donald Trump was sworn in as president, Bruce Ohr continued to act as a go-between for Steele with the FBI and Justice Department.”

“The anti-Trump Russia investigation, now run by Robert Mueller, has been thoroughly compromised by this insider corruption.” Fitton asserted.

Here is one example that shows a conversation between Bruce Ohr and Christopher Steele:

On Friday, July 29, 2016, Steele emails Bruce Ohr about a meeting that is to include Bruce’s wife Nellie Ohr, who then worked for Fusion GPS, at the Mayflower Hotel:

Just to let you know I shall be in DC at short notice on business from this PM till Saturday eve, staying at the Mayflower Hotel. If you are in town it would be good to meet up, perhaps for breakfast tomorrow morn? Happy to see Nellie too if she’s up for it. Please let me know. Best, Chris

Nice to hear from you! Nellie and I would be up for breakfast tomorrow and can come into town. What would be a good time for you? Bruce

On me at the Mayflower Hotel, Conn Ave NW at 0900 should work but I’ll confirm the time for definite this eve if I may. Looking forward to seeing you. Chris

Ohr: Sounds good, but we won’t let you pay for breakfast! I’ll wait for your confirmation on time. Bruce

Read the full press release [HERE] as it reveals several more in depth conversations between Bruce Ohr and Christopher Steele.