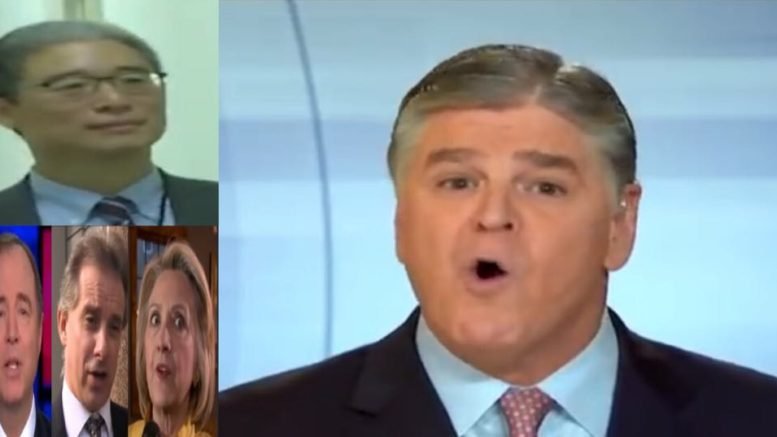 In his opening Friday evening, Sean Hannity dropped explosive details surrounding the ‘Deep State’ and the evidence that backs it up.

“Everything that we have been revealing about the ‘Deep State’ for two years will very soon result in major, serious ramifications.” Hannity announced. (Video Below)

“After a surprise move by one very brave House Republican, we now have damning evidence surrounding the corrupt, unethical, dishonest actions of so many ‘Deep State’ actors over the past three years.” Hannity began.

Rep. Doug Collins (R-GA) on Friday, released the full transcript of former associate deputy attorney general, Bruce Ohr’s deposition. Hannity pointed out that there will be a cascade of depositions released.

(Related: Rep. Collins Announces The Release Of Ohr Transcripts & How The Public Can Find Them)

“The ‘Deep State’ house of cards, mark my words, it is beginning to tumble down.” Hannity declared. (Video Below)

Hannity broke down the background of Bruce Ohr and explained why his testimony is important.

“Bruce Ohr was once the fourth highest ranking member of Obama’s Department of Justice. He became a conduant for the federal government’s Russia collusion investigation. His wife Nelly, actually worked for Christopher Steele. She was working for Fusion GPS on the Clinton bought and paid for anti-Trump dossier. And [she] used her husband’s position to proliferate the dossier’s contents throughout the highest levels government.” Hannity explained.

According to the Bruce Ohr’s public transcript, he passed along a “thumb drive” from his wife to the FBI “so Trump-haters like Strzok and Page could have direct access to Hillary Clinton’s opposition research.” He pointed out. (Video Below)

Hannity also noted that both the FBI and the Clinton campaign, via Fusion GPS, were paying Christopher Steele for the “so called intelligence.” Further, Steele was being paid by a Russian olegart.

“Let me recap this so you understand this: Steele was getting paid by your FBI, Hillary Clinton, the DNC and a Russian olegart! Pretty good gig if you can get it, but that’s not all. Thanks to this transcript, we now know that Bruce Ohr testified, under oath, about meeting with Fusion GPS founder and Christopher Steele’s boss, Glenn Simpson. Now this occurred during the 2016 campaign. Simpson testified that he didn’t meet with Bruce Ohr until after the election. The question is: which one of these two guys is lying?” Hannity asked.

“Which one is lying? My money is on Schiff.” Hannity said.

Hannity then explained where things get really important. “Bruce Ohr also testifies that he notified the FBI of the dossier’s extremely bias source and Christopher Steele’s personal mission to stop Trump, a big Trump hater. On page 15 of the October 2016 FISA application against Carter page reads: the FBI claimed it was ‘unaware of any derogatory information’ about Steele.”

However, Hannity said, “That’s right, the problem is, everybody in the FBI knew in August of 2016, that the dossier tainted– Hillary Clinton and the DNC paid for it. Comey, McCabe… even briefed Andrew Weissmann, who’s Mueller’s pitbull about this bias.” (Video Below)

“Literally, the Special Counsel’s Office has been long aware of the bias origins of the fake, phony Clinton-DNC and apparently FBI, and Russian olegart payments to Christopher Steele! This is hugely important. A detail never provided to the FISA court. That’s called a conspiracy to commit fraud on a court, to spy on a Trump campaign associate– denying that person his constitutional rights, and this being done at the height of the 2016 election.” Hannity expressed.

In other words, they have purposely withheld to the FISA court, conspiracy to commit fraud, plain and simple– information that was so relevant. And it became the bulk of the FISA application.

Hannity said it doesn’t end there and further pointed out that Christopher Steele testified under oath in Great Britain and that, he didn’t know if any of the dossier was true. “Maybe 50/50,” Steele said. In other words, the author of the dossier doesn’t stand by the dossier.

However, Senator Lindsey Graham (NC) has reopened the Senate investigation into FISA abuse. “Unlike the Democrats, this investigation centers around real crimes with real evidence. So, what I’m telling you is that it’s all now beginning to cascade down. It’s time to officially pull the veil off the ‘Deep State’ effort.” Hannity said. (Video Below)

“They tried to steal an election! They had a favorite candidate, Hillary Clinton. They had somebody they didn’t like, Donald Trump. They literally wanted to alter the will of the American people, both before the election, and then undo the career of a duly elected President. This is abuse of power that we have never, ever seen in the history of this country.” He asserted.