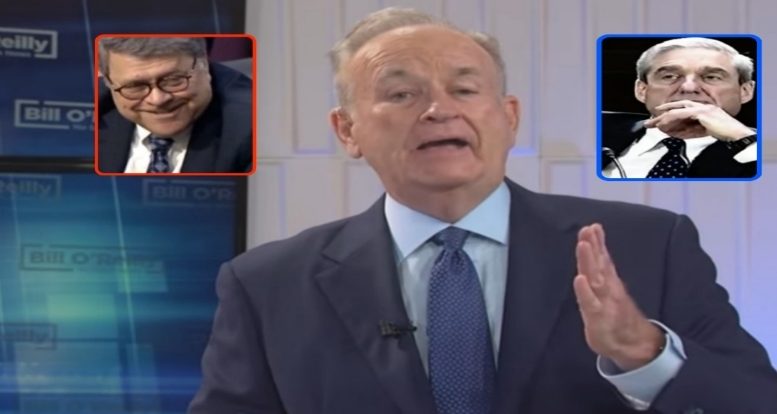 Bill O’Reilly gave his take on the state of the Mueller report as there has been no clear-cut time-table indicating when it will be released.

Just weeks ago, rumors swirled suggesting the report would soon be handed over to Attorney General William Barr. Although here is still no evidence confirming this to be the case, O’Reilly gave some insight on what to expect.

O’Reilly began by saying what millions of Americans are thinking, which is, “So where’s the Mueller report? Where is this thing? It was supposed to be out last week and this week. Nobody knows where it is!”

That’s when O’Reilly dropped a clue on when he thinks the report will come out. He said, “The guy in charge, overall, of the Mueller report is Rod Rosenstein.” He continued, “Rod Rosenstein gets the boot in mid-March.”

Related Article:  Fitton Indicates Why Mueller Has No Business Writing A Report On Trump: ‘We Already Have One Corrupt Dossier’

O’Reilly proclaimed that Rosenstein “can’t get the boot until the Mueller report is released to the Attorney General (William Barr).” This is because, otherwise, things would be way too chaotic if the report isn’t released before Rosenstein leaves. So at the latest, we’re looking at a mid-March Mueller report release, according to O’Reilly. Video Below

With all of that taken into account, O’Reilly said AG William Barr is “The Man” because he technically doesn’t have to release the Mueller report to anybody. And it’s up to him to pick and choose what should be revealed to Congress and the public after drawing conclusions from it.

O’Reilly said he thinks after Barr reads the report, he will brief both the House and Senate, but will not give them the full unredacted report. This is primarily due to information in the report that impacts national security, and because of witness testimony and other aspects that were agreed to be made confidential as part of the investigation.