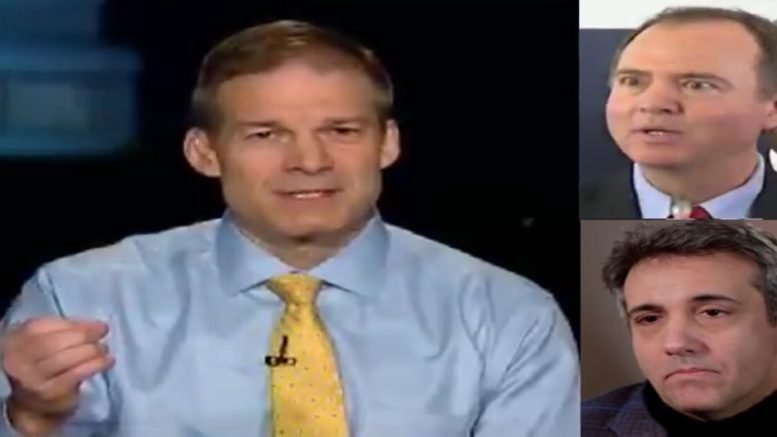 Jordan also called out Rep. Adam Schiff for being a sneaky hypocrite. (Video Below)

Rep. Jordan explained that his staff talked to Michael Cohen’s lawyer ahead of Cohen’s testimony, adding that they asked to talk Cohen, but the Democrats wouldn’t allow for it.

When asked why, Jordan explained, “Why should they? If you don’t have to let one team have a fair shake, then you can meet with him for 10 hours. Why would you do that?” He asked. “We didn’t know they were doing that, but that’s exactly what they did.”

Jordan said he asked for it, but they didn’t provide it adding, “Here’s the big irony though: You would think after ten hours of coaching [Cohen] wouldn’t come in front of congress and lie again.”

(Related: Jordan & Meadows Issue A Joint Letter Referring Cohen To The DOJ In Regards To ‘False Statements’ Made At The Hearing (Video Below)

Jordan believes Cohen lied at least 8 times before Congress and named off where Cohen claimed that he didn’t want to work at the White House, along with not seeking a pardon.

“That’s why Congressman Meadows and I have sent letters to the Justice Department talking about ‘look, this guy perjured himself on the stand, you need to investigate.'” He said.

The subject turned to Rep. Adam Schiff, who met with Cohen ahead of the hearing four times, totaling 10 hours. (Video Below)

Jordan explained that witnesses are met all the time beforehand adding, “That’s normal for Congress, I get that, but not like this,” he pointed out. “Normally, the meeting is a half hour, [or an] hour meeting. Here’s what we’re going to report, we may talk about a few things, it’s a shorter meeting. But this was four trips, at least what’s been reported. Two trips to New York, over 10 hours of actually sitting, that’s more than the normal meeting.”

“This is coaching and prepping, and frankly, my guess is they not only did that, they probably saw these exhibits, the documents that Mr. Cohen unveiled. My guess is the Democrats saw that long before we did on the morning of the hearing. That’s the problem.” Jordan said.

When asked what the sanctions are Jordan noted that Schiff wanted Rep. Devin Nunes to step down as Chairman. “Now it seems like it’s a little bit hypocritical that Mr. Schiff, who oh by the way, met with Glenn Simpson this summer out in Colorado.” He added, “That’s a call for the committee, that’s a call for Speaker Pelosi, but it seems a little hypocritical that they demanded Devin do it, and now, they are not even talking about that.”

Jordan concluded, “Here’s the thing: they brought their star witness who’s going to prison in two months for lying to Congress, they brought him in front of Congress and he lied again.” (Video Below)

"You would think after ten hours of coaching [Cohen] wouldn’t come in front of congress and lie again." –@Jim_Jordan pic.twitter.com/VMGybComYb