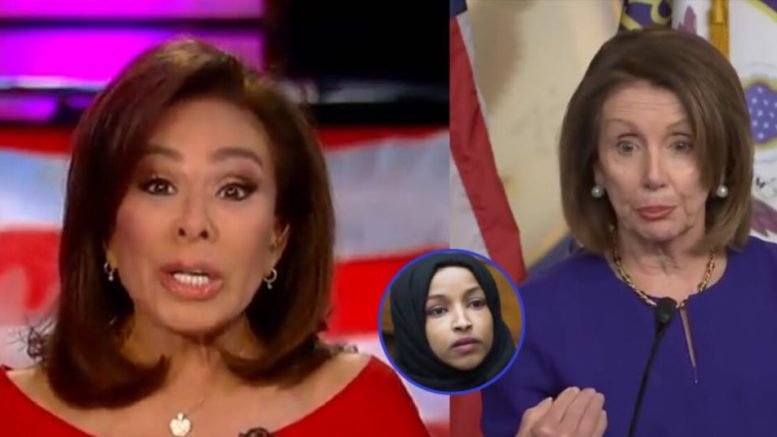 In her opening Friday evening on Fox News‘ “Justice”, host Judge Jeanine Pirro ripped into Speaker Nancy Pelosi (D-CA) after cowering to the demands of the radical left.

House Democrats passed an “anti-hate” resolution that neither condemns Rep. Ilhan Omar (D-MN), nor mentions her name after her repeated anti-semitic remarks. (Video Below)

The Judge recapped how Ilhan Omar and her family fled Somali, then were sent to a refugee camp in Kenya for four years. Afterwards, they resettled in America by our government in Virginia to enjoy the cornucopia of rights, privileges, and benefits the United States offers.

Judge Jeanine explained that Omar has been in Congress for two months representing Minnesota’s 5th congressional district. “But she’s gotten attention far beyond Washington for her anti-semitism.”

Next, the judge displayed one of Omar’s tweets that read, “Israel has hypnotized the world. May Allah awaken the people and help them see the evil doings of Israel.” However, Jeanine said that Omar apologized and pledged to learn more about anti-semitism. “Apparently she did not,” Jeanine suggested.

“Once in Congress, she continued with her hate-filled, anti-semitic, anti-Israel tropes.” The Judge further explained, “First in defending the BDS, or Boycott Divest and Sanctions Movement– calling for the boycott of events in Israel and even for the eradication in Israel, because of their so-called oppression of Palestine. Shortly thereafter, she tweets, ‘it’s all about the Benjamins baby.’ Benjaminis of course, is a clear reference to the hundred dollar bill.” (Video Below)

The Judge went on to say after Omar tweeted again with her “hate-filled rants” accusing another Democrat congresswoman of having a dual loyalty, pledging allegiance to Israel.

“The House knew it had to taken action. And after a week of chaos, in the part of House members, trying to figure out if Omar should be reprimanded, identified by name, as well as removed from the powerful relations committee, Speaker Pelosi comes out with a watered down, dumb, disappointing resolution that neither condemns Omar, nor mentions her name.” Judge Jeanine said.

The Judge ripped into Speaker Pelosi and let her have it next. (Video Below)

“Nancy, she speaks perfect English. She graduated from a college in the United States. You say she doesn’t understand the words? Are you saying she’s stupid… that she doesn’t understand? Then, what the hell is she doing on the prestigious Foreign Relations Committee? She speaks fluently using tropes which are figurative and metaphorical understanding that those words create powerful images and verbal ironies. She is far from stupid. She is clear and pointed in her hatred.” Jeanine said bluntly.

“Her comments only critical of Jews in Israel, not Italy, not, Morocco, not North Korea… Israel.” Judge Jeanine pointed out.

“The fact that you didn’t have a backbone, grit, or gumption to draft a resolution that included her name tells me you’re the stupid one!” The Judge said of Speaker Pelosi. “And if you don’t understand, let me explain.” She continued.

Jeanine laid it all out. “Omar got you and all your pals to draft a watered-down resolution with a message we all learned in first grade, ‘don’t hate anybody.’ Really? That took you bozo’s a week in the House? What’s she’s doing Nancy, is starting a movement to shutdown pro-Israel’s speech, making it politically incorrect.” The Judge added, “The Dems will not punish her.”

Then she asked of Omar, “Why the disdain for the government of the country that saved you and your family after you lived in a tent in Kenya for four years? Why the scorn?”

She further explained that this is not normal of the Democrat party, but only of Omar. “If it’s not rooted in the Democrat party, where is she getting it from? Think about it. Omar wears a hijab, which according to the Koran, 33: 59, tells women to cover so they won’t get molested. Is her adherence to this Islamic doctrine indicative to her adherence to sharia law, which itself is antithetical to the United States Constitution?” She asked.

Jeanine laid out the facts surrounding the hate on Jews around the world and added, “Hate is hate. Hate leads to violence, and violence leads to retaliation, which then leads to unrest and worse. Yes Nancy, it’s all about Israel to promote the cause of Palestine.”

She concluded, “President Trump is right when he said the Democrat party is now the anti-Israel party. And don’t forget Nancy, history has proven over and over when you appease anti-semitic sentiment, the worse happens. And it your case Nancy, the danger for you is that you’re appeasing this behavior will lead to your removal of Speaker, and the Democrats, now controlled by socialists and anti-Semites, will lose the presidency in 2020.” (Video Below)

President Trump was right when he said the democrat party is now the anti-Israel party. Don’t forget Nancy, history has proven over and over when you appease to anti-Semitic sentiment, the worst happens. #OpeningStatement pic.twitter.com/vrnzhcu95o