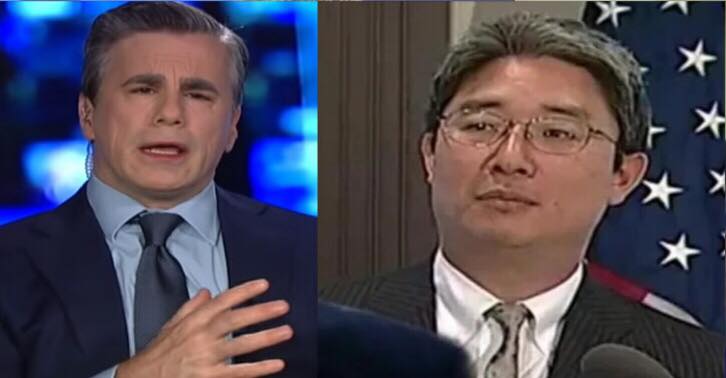 “Christopher Steele was hired by Fusion GPS, who was paid by the Clinton campaign and DNC funds, to dig up and create dirt on candidate Trump and then, President Trump,” Fitton explained.

Further, Steele was meeting with Ohr through 2016 into the campaign and through the Mueller investigation in 2017. Additionally, they were meeting after Steele had been fired from the FBI.

Fitton pointed out, “And frankly, this is kind of ‘follow the leader’ with Congress, because Judicial Watch first released the documents showing 60 communications more or less, between Ohr and Steele. You can tell it was a friendly relationship, and of course, you’ve got this compromised relationship because Ohr’s wife, Nelly, worked with Fusion GPS and was a colleague of Glenn Simpson and Christopher Steele.” (Video Below)

Fitton suggested, “This get Trump conspiracy run out of the DOJ and through the Mueller operation deserves a lot of attention.”

Asked about Rep. Adam Schiff (D-CA) meeting with Michael Cohen before his testimony and if it’s justifiable for an ethics investigation, Fitton said, “It’s highly unusual for staff to get 10 hours beforehand, especially Mr. Cohen, who already testified.” (Video Below)

Fitton noted that it’s problematic that Schiff denied any substantive communications with Cohen. However, Cohen claimed during the hearing that they talked about “topics.”

“You’ve got an ethics scandal for Adam Schiff as a result of he and his staff’s involvement in setting up and collaborating with Michael Cohen on testimony that virtually everyone who watched agrees it’s pergerious, including independent media, like our friends at CNN.” Fitton said jokingly.

Fitton also pointed out that collusion between the Clinton campaign, FBI and DOJ has yet to be investigated.

“Look, Cohen’s represented by Clinton ally, Lanny Davis. She’s still running the show in many respects. Her dossier is still being used by the Justice Department and Mueller to investigate and harrass President Trump.” He said. (Video Below)

Fitton directly asked, “Why hasn’t Mrs. Clinton been asked questions about her communications with Fusion GPS? Why haven’t her lawyers been brought in? This is sort of the basic information that needs to be followed up on by a competent Congress or an honest and fair Justice Department. Instead, the Justice Department is protecting that relationship.”

Fitton proposed, “Transparency is key here, and the President should step in, look at the other material that’s being withheld and properly authorize its release and declassication.”

(Related: Fitton Indicates Why Mueller Has No Business Writing A Report On Trump: ‘We Already Have One Corrupt Dossier’)