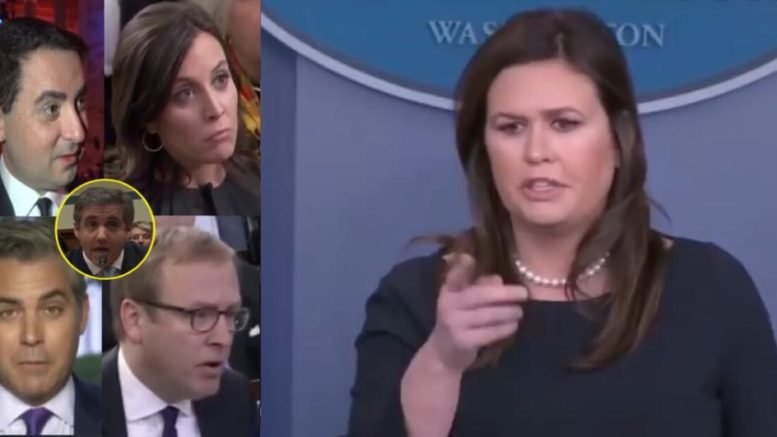 Sanders, however, didn’t miss a beat as she stepped to the podium knocking down each crooked and bias hack reporter that tried to smear the President. (Video Below)

During the briefing, Sanders said Michael Cohen “lied at least twice” in his public testimony before Congress, adding that “it’s time to stop giving him a platform.”

Sanders explained that she wasn’t going to get into specifics that were currently under review by the Oversight Committee. “What I can tell you is that Cohen’s own attorney stated and contradicted his client when he said he was aware that those conversations had taken place,” she said.

She further pointed out, “We know that Michael Cohen lied to Congress prior to his testimony most recently, and we know that he’s lied at least twice in that hearing.” (Video Below)

Sarah added point blankly, “I think it’s time to stop giving [Cohen] a platform; let him go on to serve his time, and let’s move forward with matters for this country.”

(Related: Newt Gingrich Slams The Press For Putting So Much Focus On Cohen ‘Vomiting On The Public’)

President Trump tweeted on Friday, “Bad lawyer and fraudster Michael Cohen said under sworn testimony that he never asked for a Pardon. His lawyers totally contradicted him. He lied! Additionally, he directly asked me for a pardon. I said NO. He lied again! He also badly wanted to work at the White House. He lied!” (Video Below)

(Related: Two Days After The Hearing, Cohen’s Testimony Gets Discredited By None Other Than Himself & Trump)