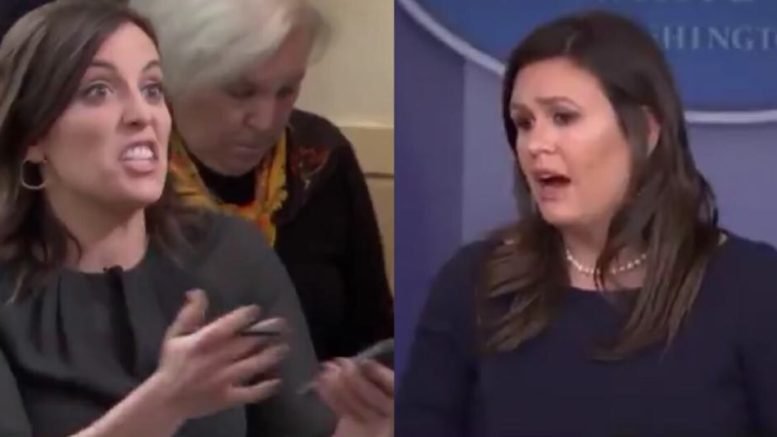 Sanders at the podium didn’t miss a beat though, as she knocked down the crooked and bias hack reporters aiming to smear the President. (Video Below)

Before heading to Alabama to visit tornado victims and survey the damage, President Trump spoke briefly with the press and responded after the House passed a resolution pertaining to comments from Rep. Ilhan Omar (D-MN).

From the White House lawn on Friday, the President called Thursday’s House vote a disgrace.

President Trump took a swipe at Democrats and said they are becoming an “anti-Israel” and “anti-Jewish” party, after the House passed a resolution that related to bigotry without directly condemning Rep. Omar for her anti-Semitic remarks. (Video Below)

However, during the briefing, the hot topic from the press was the President’s comments over the weekend. The press was drooling in their seats to ask if Trump believes Democrats hate Jewish people.

Chief White House correspondent for NBC News, Hallie Jackson, asked Sarah a smug question while throwing her hands up in the air and giving Sarah the evil eye. She further tried interrupting Sanders while she tried to answer Hallie’s question. (Video Below)

“Yes or No: does the President truly believe that Democrats hate Jews?” Hallie demanded.

“The President has had and laid out clearly his position on this matter. Democrats have had a number of opportunities to condemn specific comments and have refused to do that.” Sarah fired back.

“That’s a question, frankly, I think you should ask Democrats– what their position is since they’re unwilling to call it what it is and call it out by name and take actual action against members who have done things like this.” Sanders added.