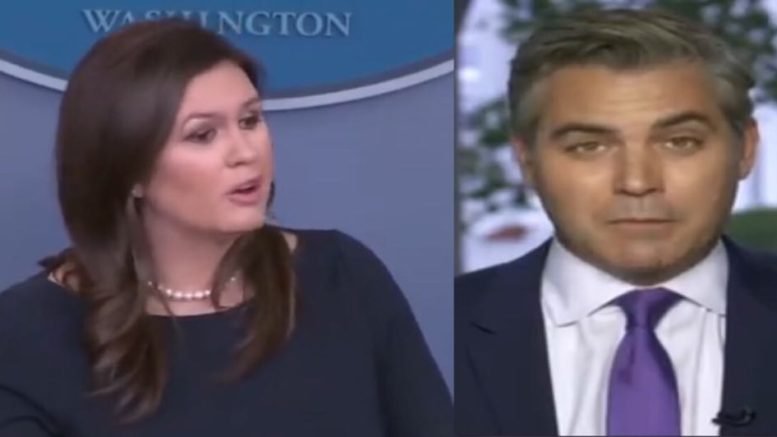 Sanders at the podium didn’t miss a beat though, as she knocked down the crooked and bias hack reporters aiming to smear the President. (Video Below)

During the briefing, CNN Chief White House Correspondent, Jim Acosta got shredded by the White House press secretary after he shamelessly tried to attack President Trump over his rhetoric.

Before heading to Alabama to visit tornado victims and survey the damage over the weekend, President Trump spoke briefly with the press and responded after the House passed a resolution pertaining to comments from Rep. Ilhan Omar (D-MN).

President Trump took a swipe at Democrats and said they are becoming an “anti-Israel” and “anti-Jewish” party, after the House passed a resolution that related to bigotry without directly condemning Rep. Omar for her anti-Semitic remarks. (Video Below)

Acosta, apparently doesn’t like the way President Trump stands up for himself and Republicans. He didn’t appear to have his diary with him during the briefing on Monday, however, he and the fake news network that he works for, seems to think it’s their job to tell the President on how to talk, act, breath, walk, and think.

“Isn’t that kind of rhetoric just sort of beneath everybody? Acosta asked of Trump. “And do you think the President has thought at all going into this 2020 campaign that the rhetoric just needs to be lowered– whether it’s talking about Democrats, the media, immigrants? Or, should we just plan on hearing the President use the same kind of language that we heard in 2016 and all through the first couple of years of this administration?” (Video Below)

Sarah turned the tables on little Jim, fired back, and roasted him in his seat.

“I think the real shame in all of this is that Democrats are perfectly capable of coming together and agreeing on the fact that they’re comfortable ripping babies straight from the mother’s womb or killing a baby after birth. But, they have a hard time condemning the type of comments coming from congresswoman Omar. I think that is a great shame.” Sarah said bluntly.

Sarah pointed out that the President has been very clear on what his position is and his support for the people in Israel.

Jim responded and told Sarah that Democrats don’t hate Jewish people adding “that’s just silly, and it’s not true.” He further brought up the CNN Charlottesville talking points where Trump said there are “very fine people on both sides.”

Sarah suggested that Democrats should call out their members by name adding, “The President has been very clear and consistently and repeatedly condemned hatred and bigotry, racism in all of its forms. Whether it’s in America or anywhere else… and to say otherwise, is simply untrue.”