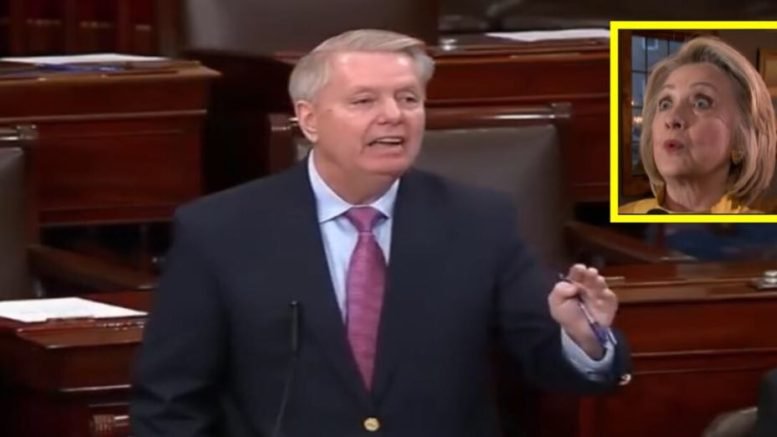 Chairman of the Judiciary Committee, Sen. Lindsey Graham (R-S.C.) on Thursday blocked a resolution calling for special counsel Robert Mueller’s report to be made public after it passed the House unanimously.

Graham, objected the House-passed resolution and called on the Justice Department to appoint a special counsel to investigate the DOJ’s misconduct in the handling of the investigation into 2016 Hillary Clinton’s email use and the Carter Page Foreign Intelligence Surveillance Act applications (FISA). (Video Below)

Sen. Lindsey Graham explained on Thursday that he supported Robert Mueller’s investigation into Russian interference in the 2016 election, and predicted that it would wrap up shortly. However, he added that he had been “trying to find balance” by also supporting an investigation into Clinton-related scandals and abuses of the DOJ and FBI

Attorney General William Barr was asked about releasing Mueller’s report during his confirmation hearings and said he would release as much of Mueller’s findings as possible, but was careful not to commit to releasing the report in full.

Related: After Hirono Suggests Recusing Himself, Barr Punts Her Idea Back To Honolulu

Under current regulations, Mueller is required to submit a final, confidential report explaining his prosecutorial decisions to the DOJ. It will be up to Barr whether to release part or any of Mueller’s findings, according to The Hill. (Video Below)

“If this stuff about [Lisa] Page, [Peter] Strzok, and [Bruce] Ohr doesn’t bother you, than that bothers me. Was there two systems of justice in 2016? One for the Democratic candidate and one for the Republican candidate?” Graham asked.

He explained the Republican candidate’s campaign had a FISA warrant issued against Carter Page based on the dossier that was salacious, unreliable, and politically charged.

“That should bother every American, and rather me telling you whether it happened it or not, why don’t we appoint a Mueller-like figure to look at how the Clinton email investigation ended up the way it did? Graham asked as he referenced the tarmac meeting between former Attorney General Loretta Lynch and former President Bill Clinton. (Video Below)

Graham continued,“If the shoe were on the other foot… if the Republican party had hired a foreign agent to go to Russia to investigate dirt on Hillary Clinton, gave it to the Justice Department and it was used on four separate occasions to get a warrant against somebody working with or associated with the Clinton campaign, all hell would pay!”

“If a member of the Justice Department told the investigators before you get the warrant, the person who involved in collecting this information ‘hates Clinton’… if there were exchanges between an FBI agent and a Department of Justice lawyer, talking about getting an insurance policy to make sure Hillary Clinton’s never elected, [and] how much they hated Trump, it would be front page news all over the world!” He expressed.

Related: Graham Gives His Theory On Why Obama’s DOJ May Have ‘Short-Circuited’ Hillary’s Email Probe

Graham further noted that we will find out soon what happened with Russia as soon as the Mueller report is released, adding that we will see if there is any “there, there.” (Video Below)

The South Carolina Senator also asked for Sen. Chuck Schumer (D-NY) to modify his request and allow Graham’s proposed amendment, noting that every Republican would support it.

Graham said of his amendment, “…That this resolution be modified calling for the Attorney General to appoint a special counsel to investigation the Department of Justice misconduct in the handling of the Clinton email investigation and the handling of the FISA warrant process as it relates to warrants obtained on Carter Page, and to publicly release the results of those investigations he agreed to consistent with law.”

(Related: O’Reilly Drops A Clue On When The Mueller Report Will Be Released & How It Will Play Out)