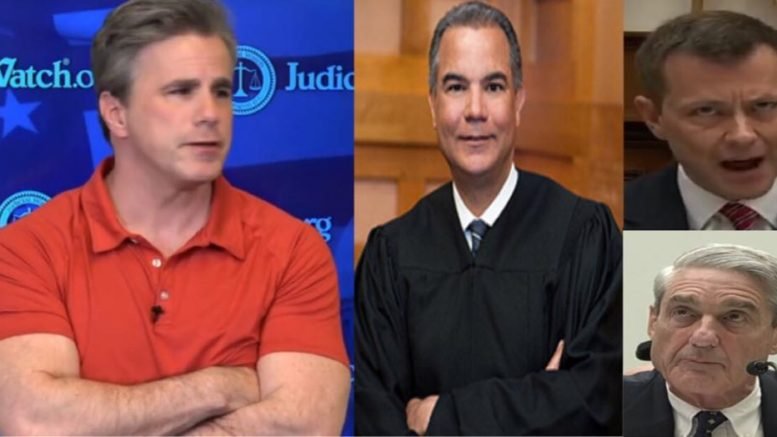 Judicial Watch is fighting for the American people and continues to do the heavy lifting exposing the truth.

In a new press release, Judicial Watch announced Friday that United States District Court Judge Christopher R. Cooper for the District of Columbia agreed with Judicial Watch that the FBI did not adequately search for records related to the removal and reassignment of Peter Strzok, a former deputy to the assistant director for counterintelligence at the FBI, from special counsel Robert Mueller’s investigative team. (Video Below)

Peter Strzok was a key player in the Mueller investigation along with Lisa Page. After text messages between the two were revealed showing their clear bias against President Trump, the lovebirds were released from Mueller’s operation.

Tom Fitton, President of Judicial Watch said, “Mr. Mueller of course, didn’t ask Mr. Strzok– according to Strzok’s testimony, ‘well did you do anything inappropriate as a result of your bias against President Trump?'” Fitton added, “He was never asked a question by Mueller. And isn’t that interesting?”

According to the JW press release, Strzok was reportedly removed from the Mueller investigative team in August 2017 and reassigned to a human resources position after it was discovered that he and then-FBI lawyer Lisa Page exchanged text messages during the Clinton investigation and 2016 election season that raised serious questions about his anti-Trump/pro-Clinton bias. They were also engaged in an extramarital affair. Strzok infamously texted “there’s no way he gets elected — but I’m afraid we can’t take that risk.”

Tom Fitton announced in his weekly update that Judicial Watch sued for the documents for Peter Strzok’s placement and removal on the Mueller team. (Video Below)

In granting Judicial Watch’s request, Judge Cooper ordered the FBI to further search their records.  (The original, deficient search had only returned 14 pages.)

The order comes in a December 2017 Freedom of Information Act (FOIA) lawsuit filed by Judicial Watch after the DOJ failed to respond to and August 17, 2017, request (Judicial Watch, Inc. v. Federal Bureau of Investigation (No. 1:17-cv-02682)).

Judicial Watch seeks: (1) All records regarding the assignment of FBI Supervisor Peter Strzok to the special counsel’s investigation led by former Director Robert Mueller. (2) All records related to the reassignment of FBI Supervisor Peter Strzok from the special counsel’s investigation to another position within the FBI. (3) All SF-50 and/or SF-52 employment forms, as well as all related records of communication between any official, employee, or representative of the FBI and any other individual or entity. (Video Below)

“So this is what the FBI does: they only look at one bucket, even know they know there are a whole bunch of other buckets– in terms of where the documents might be. And, a federal court judge in the case that we had to bring to get these documents, this week slapped back the FBI.” Fitton added, “[The judge] said the FBI was wrong to narrowly interpret the requests and conduct a narrow search and in a relatively rare move, he ordered the FBI to go back and do another search.”

Notwithstanding that Judicial Watch’s request referred to Mueller by name … the Bureau searched only for the term “special counsel.” But surely one would expect that Agent Strzok and other FBI personnel might use the Special Counsel’s name — “Mueller” — rather than his title when discussing Strzok’s assignment to the Russia investigation, especially in informal emails. Another logical variation on “special counsel” is its commonly used acronym “SCO,” which appears to be used within the Special Counsel’s Office itself, as reflected by documents that the FBI uncovered and produced to Judicial Watch.

Fitton pointed out, “They did the search, and they gave us around 15 pages of documents that show Strzok was adamant and very concerned that he keep classification and declassification authority when he went to work for the Mueller investigation… which is weird in of itself. But, they didn’t give us much of anything else.”

Judge Cooper ordered that the FBI must conduct a new search that includes “the email accounts of any of Agent Strzok’s superiors or other Bureau officials who were involved in the decision to assign him to the Special Counsel’s Office or the decision to reassign him to the FBI’s Human Resources Division after his removal from the Mueller investigation.”

Fitton declared, “They only searched Strozk’s emails; they didn’t look at anyone else. One of the biggest scandals in the FBI and DOJ history, and they only looked at the one guy’s email. That’s a corrupt search. Forget about it being insufficient, it’s corruption. That’s gamesmanship!”

The press release further states that the FBI must also expand its search to other forms of communication in addition to email. Given Strzok’s well-known use of text messaging, “it strikes the Court as reasonably likely that he discussed his assignment to the Special Counsel’s Office in text messages—which again is the standard for assessing an agency’s selection of search locations.” (Video Below)

In a nutshell, Fitton explained, “Meaning, you gotta look in places where there’s reasonably likely to be documents.”

He added, “I am so pleased that the court slammed the FBI for its gamesmanship. It’s gamesmanship in searching for the records about one of the most notorious FBI agents of all time, Peter Strzok. And, the FBI leadership is in coverup mode.”

Further, Fitton noted that Congress isn’t doing the job of getting the truth out, nor is the media. “It’s all about getting Trump. This is the corruption story of our generation. The effort to overthrow President Trump. The effort to destroy candidate Trump and spy on him, and Judicial Watch is going to deploy the appropriate resources to figure out what went on. That’s why we have well over 30 lawsuits right now.”

“No one else is doing that type of work. It’s remarkable the amount of work Judicial Watch is doing to uncover all of this.” Fitton expressed.