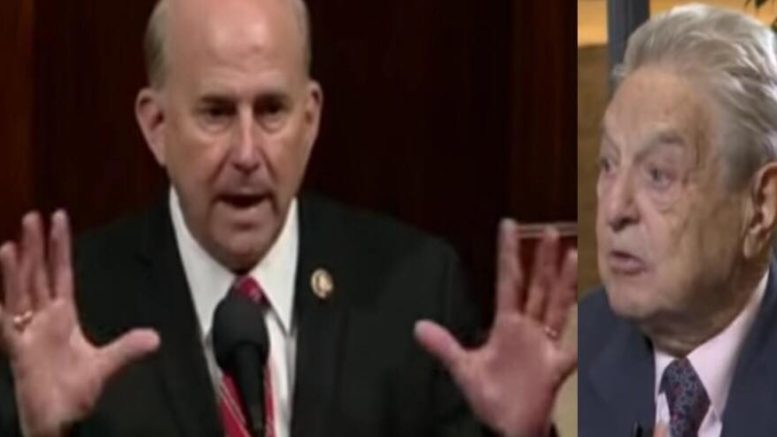 Rep. Louie Gohmert (R-TX) took to the House floor on Thursday where he called out Democrats for not condemning Rep. Ilhan Omar directly for her anti-semitic remarks. He further blasted George Soros, his evil ways, and socialism.

Gohmert, was one of 23 who voted “No” against the Democrats’ convoluted “hate” resolution last week. After accusations were flying around, he explained on the House floor why he voted “No.” (Video Below)

While speaking on the floor, Rep. Gohmert explained that the Democratic leadership pulled their first iteration of their resolution from the House floor that dealt solely with anti-Semitism, but they kept watering it down until it actually gave purveyors of anti-Semitism the ability to claim that the resolution was intended as a grand condemnation of anti-Muslim bias. That final, repeatedly weakened version did not even address the bigoted remarks that caused the need for the resolution in the first place.

“Why would a billionaire push people toward social? Because, socialism means everybody is treated equally. It’s because he knows in a socialist country, you eliminate the middle class. And what you’re left with is a very thin veneer of a ruling class and everybody else who is ruled over by the ruling class. That’s where socialism goes.” He said.

Gohmert explained what is anti-semitic: “When you slander or libel an entire race or group of people and smear them as all having the same characteristics and belittle them as a group.”

Then, he pointed out that there was supposed to be a resolution to address specific anti-semitic remarks by a member of Congress.

“Then we hear there were protests, because they didn’t want her condemned for anti-semitic remarks, so it got watered down.” (Video Below)

Gohmert said there were three resolutions and the final one was watered down. “It kept being watered down till it basically [said] we’re against all kinds of hate. Of course, they didn’t mention the kind of political hate that would cause a democrat…..”

“If it had been a Republican who supported Donald Trump, that would’ve been what everybody talked about,” he added. “Oh God! It’s what Trump inspires. But since it was a Bernie Sanders supporter, I don’t know of any Republican who has blamed Bernie Sanders for the criminal that shot Steve Scalise and tried to kill my baseball friends, colleagues… he wanted to kill em’ all.”

Related: Hannity Exposes Why Nancy Pelosi Is Not Taking A Stand Against Omar: ‘Pelosi Is Terrified Of Being Overthrown’)

Gohmert noted that was not singled out and announced, “In fact, when we were taking testimony on gun crime in Judiciary, the majority would not even allow Steve Scalise to testify! That kind of thing was not mentioned in what was basically, ‘we’re against all kinds of hate,’ except for that.” He also added that Democrats didn’t call out the hate that causes hate hoaxes. (Video Below)

“But, I have made loud and clear repetitiously the reason I and 22 others voted against that bill was because it did not do what it should’ve done and that is call out specific anti-semitic comments.” He said.

Gomart concluded, “There is a special hatred that the Jewish people have experienced that we need to stop when it starts. And for those morons that didn’t know, I voted against the first anti-hate resolution!” [Emphasized.]