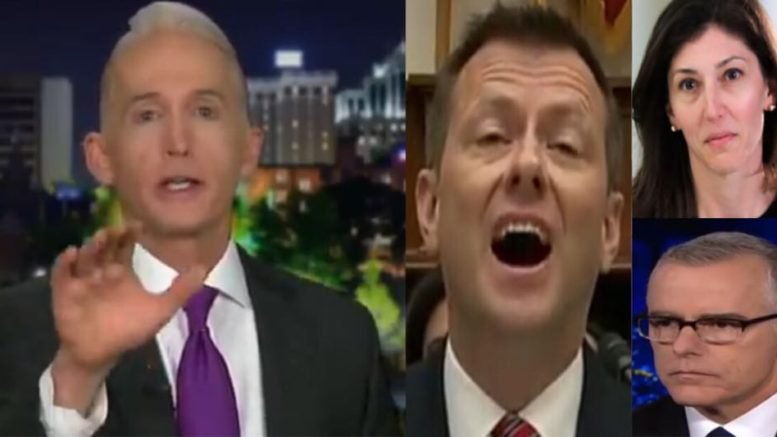 Gowdy weighed in after the release of former FBI agent Peter Strzok’s transcript and on the FBI bias against President Trump. (Video Below)

Trey Gowdy said the most important information that came out of former FBI agent Peter Strzok’s private testimony to Congress last year was about the “insurance policy” mentioned in a text message to former FBI lawyer and lovebird, Lisa Page.

Strzok testified that the mid-August 2016 text was part of a larger conversation about protecting an “extremely sensitive source” as he and Page considered how far to lean into the counterintelligence investigation into possible links between the Trump campaign and Russia, as they didn’t think Trump had a very good chance of beating Hillary Clinton in the election, according to Washington Examiner.

However, Gowdy doubts such a source ever existed.

“The most charitable view of what they meant by the insurance policy is that they had a source. They had a confidential informant that they didn’t want to burn.” Gowdy said of the insurance policy adding, “Guess what? He did. So if you have a source that has information or evidence that the leader of the free world is an agent of Russia, come on with it. Give it to us! Give us the information!” (Video Below)

“There is no information because there is nothing. There is no source,” Gowdy said after two years of nothing.

“The insurance policy is Lisa Page, Andy McCabe, and Peter Strzok all sitting in a room saying ‘look, he’s not likely to win, but on a remote chance that he is, we have an insurance policy which is this FISA investigation.'” Gowdy explained. (Video Below)

“It’s a counterintelligence investigation that we launched in July– that was their insurance policy. They just never thought that [Trump] was going to win.” Gowdy continued.