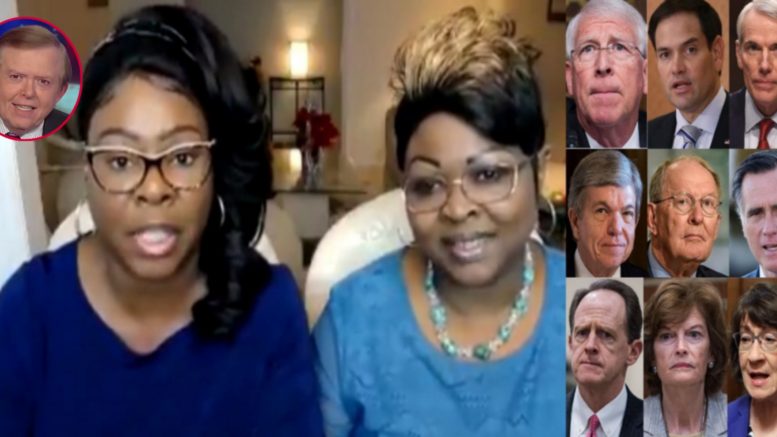 On Thursday, twelve Republican Senators sided with Democrats in a vote to terminate President Trump’s national emergency declaration along the southern Mexican border.

The legislation was passed by both chambers of Congress, only to be immediately vetoed by the President. And now, Republican Senators who helped with  the bill’s efforts are now facing uproar from their party who strongly support Trump.

Pro-Trump All-Stars, Diamond and Silk, appeared on Lou Dobbs to voice their support for Trump’s veto and also their frustration with the twelve Republican “swampets” who helped Democrats in their opposition to President Trump.

She then ripped those in the Republican party who voted against Trump’s national emergency. Video Below

With Silk’s full approval, Diamond said, “We say shame on those twelve Republicans that sided with Democrats.”

Related Article: Graham Chimes With Rush & Signals How Declaring A Nat’l Emergency Is A Win-Win: ‘We’d Be Stupid As A Party Not To Stand Behind Him’

She added, “We call them the new ‘swampets’ because they went along, singing along with Democrat. And the President had to do this because of their doings.”

#BuildTheWall–@DiamondandSilk: @POTUS is committed to making sure we have border security. Shame on those 12 GOPs who sided with Dems. We now call them the new “swampets” because they sing along with Dems. It’s time to secure our border once & for all. #MAGA #TrumpTrain #Dobbs pic.twitter.com/91CDSbiPjG

As a reminder, here are the 12 Republican Senators who voted against President Trump’s national emergency declaration: