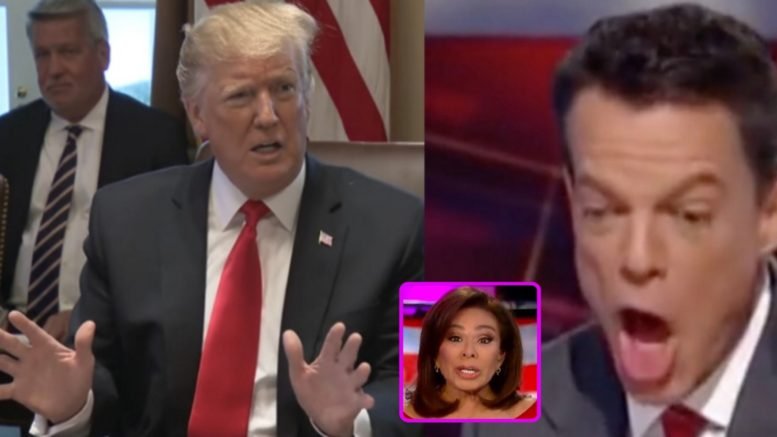 President Trump took to Twitter Sunday blasting Fox News’ host Shepard Smith and suggested he should be working at CNN along with two of the network’s weekend anchors, Arthel Neville and Leland Vittert.

He also wondered if the anchors were “trained by CNN” before the network’s ratings collapse. (Video Below)

While the President’s reason for calling out Neville and Vittert is unclear, Shepard Smith has long drawn criticism of many conservative Fox News viewers.

President Trump tagged Arthel Neville and Leland Vittert in a tweet and wrote, “Were @FoxNews weekend anchors, @ArthelNeville and @LelandVittert, trained by CNN prior to their ratings collapse?”

Then, he slammed down a truthbomb and declared, “In any event, that’s where they should be working, along with their lowest rated anchor, Shepard Smith!”

“Fox must stay strong and fight back with vigor,” President Trump tweeted. “Stop working soooo hard on being politically correct, which will only bring you down, and continue to fight for our Country. The losers all want what you have, don’t give it to them. Be strong & prosper, be weak & die! Stay true to the people that got you there.”

(Related: Trump Takes Note Of Jeanine Missing, Urges Fox To Stay Strong: ‘The Losers All Want What You Have’)

Several advertisers pulled their ads from Pirro’s show last week in the wake of the Omar controversy, reported The Hill. (Video Below)

Tucker Carlson, host of Fox News’s “Tucker Carlson Tonight,” also lost advertisers after a left-leaning blog resurfaced comments he made during appearances on a radio show between 2006 and 2011.

Were @FoxNews weekend anchors, @ArthelNeville and @LelandVittert, trained by CNN prior to their ratings collapse? In any event, that’s where they should be working, along with their lowest rated anchor, Shepard Smith!

President Trump also retweeted a comment from Linda Sushler who wrote, “Absolutely true, President Trump. When those three show up, I turn @FoxNews OFF!”

Perhaps Fox News should start listening to their viewers.

Absolutely true, President Trump. When those three show up, I turn @FoxNews OFF!

We leave you with Chris Wallace destroying Shepard Smith after “Shep” pushed a hard left narrative that President Trump was to blame for the attempted mail bombs delivered by Cesar Sayoc to Democratic players:

Related: Judge Jeanine SHREDS Pelosi For Appeasing Omar’s Behavior: ‘The Joke Is On You, Nancy’