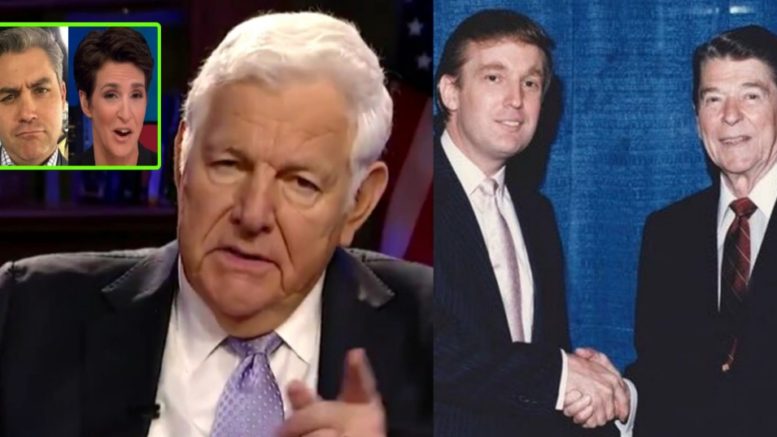 Host Mark Levin was joined by William Bennett who served under President Ronald Reagan. (Video Below)

William John Bennett is an American conservative pundit, politician, and political theorist, who served as Secretary of Education from 1985 to 1988 under President Ronald Reagan. He also held the post of Director of the Office of National Drug Control Policy under George H. W. Bush, reports Wikipedia.

During the interview, Levin asked Bennett how is President Trump doing and what does he think of him.

Bennett replied, “I like him a lot. I supported him, not originally, I wasn’t sure.” He added, “I was listening to the people who were saying ‘there’s not a chance.’ But when he did the announcement, it caught my eye; a couple sentences in that announcement about ‘America had lost some of its greatness’ and ‘we needed to make America great again.'”

He explained that his sons were fully onboard with Trump and told him, “This is they guy! This is what you believe in.” Bennett agreed with his sons and then he signed on. (Video Below)

Bennett said he has a good perspective on things, yet he’s a swamp creature who has lived in D.C. for almost 40 years. “I’ve been living in the swamp since 1981, since Ronald Reagan brought me here.”

Then he joked, “You know, there’s a great thing they say about the Irish: somebody told me this is my style. They said, ‘you’re like the Irish man who walks down the street, sees a fight going on and says ‘is this a private fight or can I get in on it?'” He added of the President, “Trump looks for a fight, he starts them, but he usually has a good reason.” (Video Below)

Bennett said President Trump is resilient, tough and that he admires him.

“I know he means it when he talks about American greatness and how he wants to make this country great again.” He expressed.

Levin agreed and admitted he too was also skeptical, but his late father told him, “Get off his back, listen to what he’s saying. This man can do what he’s going to do, we need somebody like this.”

“The media hates him in such a way, even more than Nixon. I’ve never seen it before. Is it because they were so invested in a third Obama term? They viewed him and the people that support him as a joke? Is it because he defies them? He not only rejects them, he humiliates them. Is it all those things? Or is something else?” Levin asked Bennett.

Bennett agreed and said, “It’s all those things and I would add he doesn’t genuflect to them. They may make him mad and in the end he does not care, in the terms of his direction. He’s not going to change direction.”

While speaking of the media, Bennett suggested said how they report Trump’s “8,000 lies”, but he suggested that somebody needs to make a list of his “8,000 great things he’s done.” (Video Below)

“The media are more out the closet now, ideologically I think, than ever before, am I right?” Levin asked.

Bennett replied, “Yeah, he’s exposed them. [Trump] said look, listen and watch. You would think they would’ve been more careful about fake news, once he made this charge, but they haven’t.” He added of the journalists today that they “go into the business in order to get somebody, the gotcha journalism. I believe, they think they are doing justice by doing this. They are committed ideologues and they don’t know it.”

(Related: Trump Takes Note Of Jeanine Missing, Urges Fox To Stay Strong: ‘The Losers All Want What You Have’)