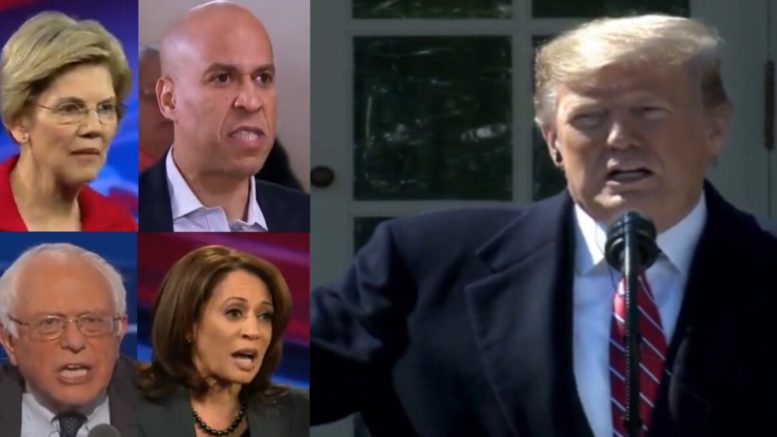 President Donald Trump participated in a joint news conference in the Rose Garden on Tuesday with President Jair Bolsonaro of Brazil.

Bolsonaro praised President Trump for his strong leadership along with their working relationship. (Video Below)

Afterwards, they took a few questions from the press, and President Trump told reporters that essentially he will be President for six more years while slamming democrats’ far-fetched dreams.

Reporter Saagar Enjeti from the Daily Caller asked President Trump, “There’s a growing number of Democratic candidates that have endorsed the idea of adding seats to the Supreme Court. Is that an idea that you would entertain in the remainder of your term or possible next term?”

“Or, is that something that you do not agree with?” Enjeti asked the President. (Video Below)

“No, I wouldn’t entertain that.” President Trump said bluntly, then he pointed out, “The only reason that they’re doing that is because they want to try and catch up.”

(Related: While Discussing Ginsburg, Graham Reveals How The Past Will Come Back To Bite Dems)

Trump added, “So if they can’t catch up through the ballot box by winning an election, they want to try and do it through a different way now. We would have no interest in that whatsoever.” (Video Below)

“It will never happen. It won’t happen.” Then, the President declared, “I guarantee it won’t happen for six years! [Emphasized]

(Related: At The Press Conference, Brazil’s President Makes A Resounding 2020 Prediction: ‘Trump Is Going To Be Re-Elected, Fully’)

(Related: TRUMPED: While Facing The Press, Brazil’s President Slams The Media With A Harrowing Trumpism)