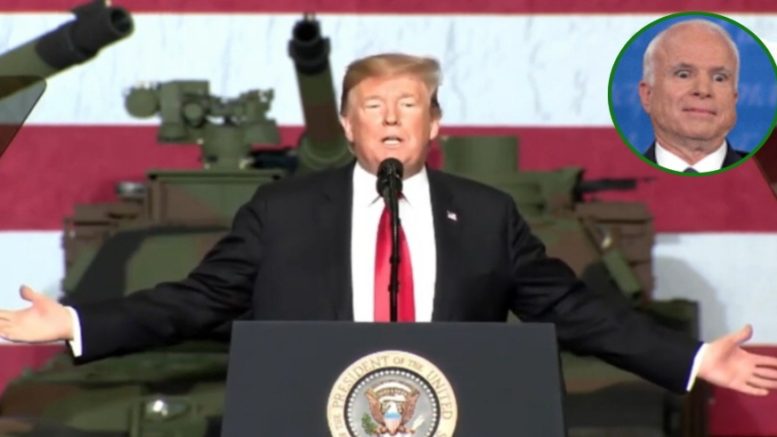 President Trump gave a speech at a military tank plant in Lima, Ohio on Wednesday where he focused on the booming economy.

While speaking to the audience, President Trump said the press keeps asking him about late Senator John McCain (R-AZ), so he responded and laid out why he didn’t like him. (Video Below)

The President said to the crowd on Wednesday, “I have to be honest, I never liked him much. I probably never will.”

“But, there’s certain reasons and I’ll tell you: John McCain received the fake and phony dossier. Did you hear about the dossier? It was paid for by crooked Hillary Clinton, and John McCain got it. And what did he do? He didn’t call me. He turned it over to the FBI hoping to put me in jeopardy, and that’s not the nicest thing to do.” Trump explained.

President Trump also pointed out how McCain campaigned for years in Arizona to “repeal and replacing Obama Care.” Trump said, “When he finally had the chance to do it, he voted against it.” (Video Below)

Trump further pointed out how McCain hurt the party by voting no on repealing Obama care because it hurt our nation and many sick people who desperately wanted affordable health care.

“We would’ve had it. This would’ve saved our country over a trillion dollars in entitlements, and we would’ve ended up making a great health care plan.” The President added, “And frankly, with the democrats, because they would’ve had no choice.”

He also pointed out how McCain failed to help veterans at the VA. “The vets were on my side because I got the job done. For 45 years they were mistreating our vets. And we say ‘hey! You’re fired! Get out! You can’t mistreat our vets! They never got it done.” He added. (Video Below)

“So now we’re into that war for 7 trillion dollars. Thousands and thousands have been killed, millions of people overall. And frankly, we are straightening it out now, but it’s been a disaster for our country.” He said.

The Commander in Chief also said, “I endorsed him at his request and I gave him the kind of funeral that he wanted, which as president I had to approve. I don’t care about this, I didn’t get a ‘thank you’. That’s OK.”

He concluded that the press keeps asking him about McCain and he noted, “Not my kind of guy, but some people like him, and I think that’s great.” (Video Below)

We leave you with fake outrage from Shepard Smith responding to President Trump’s comments:

Fake outrage from Shep! Why is he still on Fox News and not working at “Fake News”@CNN? The President is allowed to have his own opinion, you biased hack. @ShepNewsTeam @FoxNews @realDonaldTrump pic.twitter.com/0Q5OG42dQ7