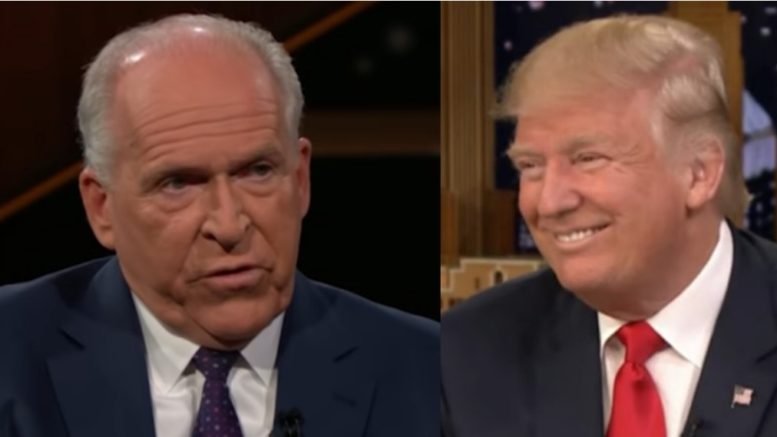 Former CIA Director, John Brennan, took more jabs at President Trump on Wednesday, and insinuated the President is worried about what is to come from Robert Mueller’s probe.

In a response to Trump’s Twitter smackdown of Conway, Brennan said, “Hmmm…your bizarre tweets and recent temper tantrums reveal your panic over the likelihood the Special Counsel will soon further complicate your life, putting your political & financial future in jeopardy.”

He added, “Fortunately, Lady Justice does not do NDAs.”

Although Brennan may have thought he scored a grand slam against Trump, a great majority of those who replied to him begged to differ and, instead, roasted the former CIA Director for making such a statement. See Below

Hmmm…your bizarre tweets and recent temper tantrums reveal your panic over the likelihood the Special Counsel will soon further complicate your life, putting your political & financial future in jeopardy. Fortunately, Lady Justice does not do NDAs. https://t.co/ktFRevlOcd

Here are some of our favorite responses to Brennan that we came across:

Oh go back into your snakes den.

You are a disgrace to this country! #MAGA

John: all the assets you weaponized against me are being outed in London, Canberra and Rome. Mifsud, Halper, Downer, Tawil etc. congress has the names, my testimony and foreign governments are now cooperating with the Trump administration to out the rest. Good luck.

John boy, are you looking in the mirror again?😂Your tweets are so bizarre that they are revealing your complete fear of what’s coming your way. Better yet, your tweets show the fear of where you’re going. That would be…GITMO😳😂😂😂Enjoy the flight to your destination🤡.

Haha. Yesssss. President Trump is the one in panic mode.🙄

Your constant trolling and retweeting the POTUS (always in a negative form), clearly shows just how TERRIFIED you truly are.

Keep up the petrified work, John. We’re loving it!😆

You'll know Lady Justice when she bites you on your commie red ass!

Are you jealous he defeated ISIS after you supported them? Where’s that “red line” Mr Brennen? Enjoy Gitmo.

C – Control
Soon the only place you "get' to hide is #GITMO!! Waiting faithfully for that day, that you and all your treason friends are put away for good!!! #Trump2020Landslide!

And when the Sp. counsel reveals there was no collusion, no obstruction, nothing, you will yield and apologize for all your errors. Let me make a prediction, y’all just move onto the next thing noting Mueller was part of the corruption.

Is that a threat, #JohnBrennan? Calling someone out isn’t a temper tantrum! Get real! Clean up your own closet & stop disrespecting our @POTUS! The only ones panicking are the #Dems! #KAG2020🇺🇸 pic.twitter.com/rl8JFz1yKO

Oh! There you are! Bottom left corner! pic.twitter.com/S4IKK5SnBt