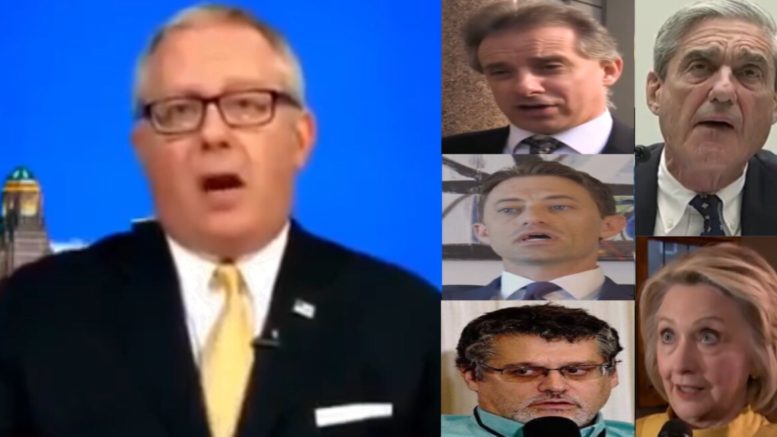 Caputo was investigated by the United States House Permanent Select Committee on Intelligence as part of their investigation into Russian interference in the 2016 presidential election.

After working for the Trump presidential campaign for eight months, Michael Caputo has been hauled in to testify before two congressional committees and investigators working for Special Counsel Robert Mueller. Further, Jerry Nadler (D-NY) added him to the list of the 81 associates he’s targeting.

For almost two years, Caputo’s life and family has been on hold.

When asked if he will be owed an apology after the Mueller report shows no evidence of collusion, Caputo said, “I think so, but there’s no office of return of your reputation at the United States Capitol. Certainly, not at the offices of MSNBC.”

Caputo listed key players that are “in the bowels” spreading the disinformation about Russia collusion. “For example, you talk about Brennan. You talk about these other players in front of everyone.” He added, “We have a player like Dan Jones.” (Video Below)

Caputo revealed, “He’s working closely with Glenn Simpson today with Christopher Steele, the former British spy who Hillary Clinton and the DNC paid for. He’s working with him today!” He declared. (Video Below)

Caputo further disclosed that Jones puts out a daily email to reporters and Democratic committee staffers on the Hill who are still peddling the Russia collusion hoax.

“[He’s] still peddling stories that have been completely disproven, and he’s still getting hits in the media, even today.” He said.

When asked if knows who gave the 10 million dollars, Caputo responded, “Yes, he admitted it’s being paid for by George Soros, Rob Reiner, ‘Meathead- from ‘All In The Family’.” He added, “A foundation close to Styer character who is running this ‘impeach Trump now’ deal.

He further said that Dan Jones, Glenn Simpson and Christopher Steele are getting rich. “Rich beyond their wildest dreams!

“Look up 18-USC 2384,” Caputo said. “And apply that to Dan Jones. If we don’t have some kind of investigation into Dan Jones, Christopher Steele and Glenn Simpson, and Fusion GPS– and if we find a crime related to 18-USC 2384, sedition, then we have no country! We have no rule of law!” (Video Below)

Paul Sperry at Real Clear Investigations notes that five days a week, The Democracy Integrity Project, or TDIP, emails a newsletter to influential Democrats and prominent Beltway journalists under the heading “TDIP Research” – which summarizes the latest “collusion” news, and offers “points of interest” to inspire fresh stories regarding President Trump’s alleged ties to Moscow.

Recipients of the TDIP reports include staffers at the New York Times and Washington Post and investigative reporters at BuzzFeed, ProPublica and McClatchy, as well as news producers at CNN and MSNBC, according to a source familiar with the project’s email distribution list. Democratic aides on Capitol Hill also subscribe to the newsletter, Sperry wrote.

Jones’ project doesn’t just spin the news. Its more ambitious goal is to make news by essentially continuing the Clinton-funded investigation into alleged Trump/Russia ties that began in 2016, and then sharing findings with news outlets, congressional investigators and federal agents, reported Sperry.

For further information, check out the article written by Paul Sperry titled, “Trump-Russia 2.0: Dossier-Tied Firm Pitching Journalists Daily on ‘Collusion” as it goes into further details revealing the dirty dealings continuing deep within the swamp.

(Related: Tucker Drops A Reality Check On The Russia Hoax: ‘Will They Be Disappointed, Or Assume Putin Got To Mueller Too?’