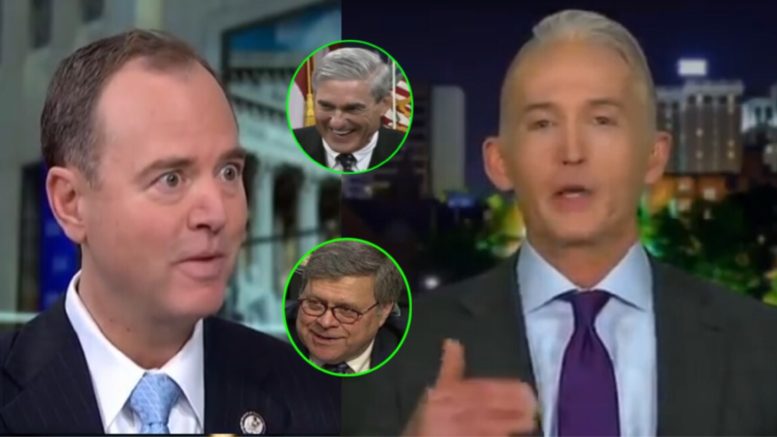 Fox News contributor Trey Gowdy weighed in on what happens next, along with slapping down the Russia collusion conspiracy theorists.

Both Barr and Rosenstein have seen the report, according to a senior DOJ official. Further, AG Barr also informed Congress that Mueller’s investigation has ended.

(Related: Right After Mueller Turned In His Report, A Letter Surfaces From Barr To Congressional Committees)

Mueller is “not recommending any further indictments,” a senior DOJ official told Fox News. (Video Below)

Former South Carolina Congressman respond to what will happen next. “Attorney General William Barr will read the report, and I think, he is going to want to share as much as he can, because Barr understands what I’ve understood since day one. Mueller’s number one job is to report on what Russia did.”

He continued, “The second part of that is with whom, if anyone, did they do it?”

“That is the Democrat focus, that is their obsession. That was not Mueller’s obsession.” Gowdy said. (Video Below)

Gowdy pointed out that Democrats can subpoena Mueller and bring him to Capitol Hill noting “we have three separate branches of government. This report belongs to the Executive branch. It’s also the fact that the FBI and the and the Department of Justice do not exonerate people.”

“[That] set a terrible precedent for this country. Prosecutors should never do that. Either charge and shut up and go to trial, or don’t charge. But don’t fail to charge and lay out all the reasons you should have.” He said.

Ranking member of the intelligence committee, Adam Schiff (D-CA) responded after Mueller’s report was released to the Attorney General and said, “I would argue that the Department can’t adopt a double standard and should cooperate willingly. But if it doesn’t, we will have to subpoena the evidence. We’ll have to subpoena Mueller or others to come before Congress and answer questions.”

Schiff continued, “Because if there is evidence of a compromise, whether it’s the level of criminal conduct or not, it needs to be exposed.”

Fox News host Harris Faulkner asked Gowdy, “Is he saying he won’t believe the report if it does not show collusion or obstruction of justice, or any other kind of crime, and this President and others will not be indicted?” (Video Below)

Gowdy fired off at Schiff’s desperate remarks and declared, “Harris, he’s the saddest man in the United States of America! Not only did he have evidence of collusion on the President, but you may remember he said the President may very well be indicted. And, he also said he may he may be the first President who faces the prospects of jail.” [Emphasized]

Gowdy explained that what Schiff is seeing is a strategy to keep a “Russian cloud” over the Trump administration until 2020. “Adam has seen nothing that I haven’t seen. So how could two people  have such disparate views of evidence? I never saw evidence of collusion between the Trump campaign and Russia –unless you’re looking at it through a political prism.”

He also brought up Rep. Eric Swalwell (D-CA), who said on national TV that indictments are coming.

“These guys know what the evidence is. They are very disappointed, because they said that there would be [indictments] and so, they are going to try and drag this out. They are going to try and bring Barr and Mueller over and see if this witness said this, this witness said that… it’s a political win for them, but it’s a loss for the country. (Video Below)

(Related: Mike Huckabee Gets The Last Laugh On Democrats As Mueller’s Probe Comes To An End)