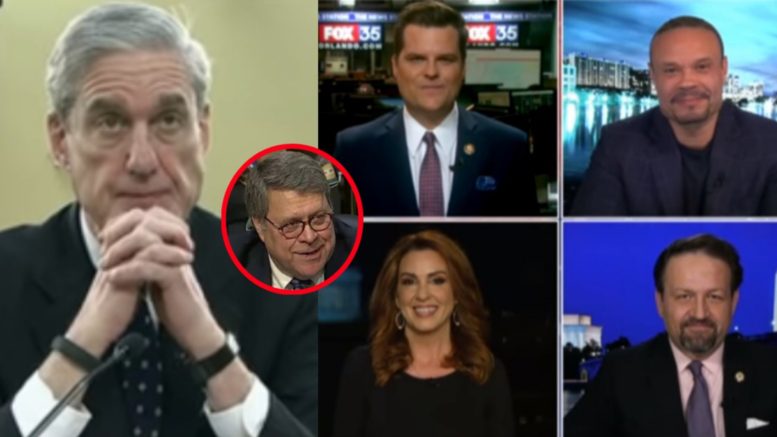 Special Counsel Robert Mueller has submitted to Attorney General Bill Barr his long-awaited report on the investigation into Russian meddling in the 2016 presidential race and possible collusion with Trump associates — marking the end of the politically explosive probe and the beginning of a new battle over its contents and implications, Fox News reported.

After nearly two years of investigating, no one has been charged with anything relating to Russian collusion.

After Democrats and media heads claimed the “end of sight is near” for President Trump, the panel launched their attacks and fired off.

Jesse Watters began by explaining how he felt: “I feel like this delivers a knockout blow to the press and the Democrats who’ve been saying collusion, collusion, collusion for the last two years, and when you couple that with a hot economy and the decimation of the ISIS caliphate, this is a two term presidency. The Democrats are going to have to start working with this President and not working against him.”

Bongino explained that the entire FBI’s case was based on the Steele dossier. “The dossier is the collusion scandal! That’s everything. If Mueller could not indict and vindicate even one small component of that dossier, all of the players that spied on Donald Trump, used human intelligence assets, weaponized the intelligence agency, have now, nothing to fall back on.”

He asked, “When exactly did Mueller find out there was no collusion? I think Mueller knew early on this thing was a big, stinking pile of dog… you get it. It was a hoax.”

“The real collusion here were Democrats hiring a foreign spy, who was a known liar to the FBI, to work with Russians, to tell lies about the President– to destabilize what has now become one of the most successful Presidencies in the entire modern era.” Gaetz continued.

Asked where the Democrats will pivot now, Sara Carter said, “They have already made it perfectly clear. They want to pivot to President Trump’s family, to his businesses.” She also noted the southern district of New York.

(Related: Dems In Denial: Irate Talking Heads Drop Theories On Why Mueller Probe Didn’t Turn Out The Way They Hoped)

“They’re focused on both the election, whether there was election fraud, the family, the foundation. While we have on the other end probably one of the biggest most egregious breeches with our intelligence community with the FISA, the foreign intelligence surveillance act warrant, malfeasance within the FBI, and also within the DOJ.” Carter explained.

Dr. Sebastian Gorka weighed in after Watters said the Mueller investigation was a “white wash” and a coverup for the dirty dealings of the FBI and DOJ.

“Remember what we saw in the text messages from inside the FBI and the DOJ. We need an insurance policy if Donald Trump wins.” Gorka asked, “This is the the insurance policy. We had two years, 25 million dollars of our taxpayer money wasted…. to prove what? Paul Manafort lied on his mortgage application? This is a travesty.”

“The only reason we had the Mueller probe is because Hillary Clinton lost and they had to have a coverup for everything they did to spy on another presidential campaign. This is the biggest political scandal in American history. We’ve spent two years on a witch hunt, and the President was vindicated. People have to pay a penalty for what they did with our money and how they used the law enforcement powers of this country as a political weapon.” Gorka said bluntly. (Video Below)

(Related: Mike Huckabee Gets The Last Laugh On Democrats As Mueller’s Probe Comes To An End)