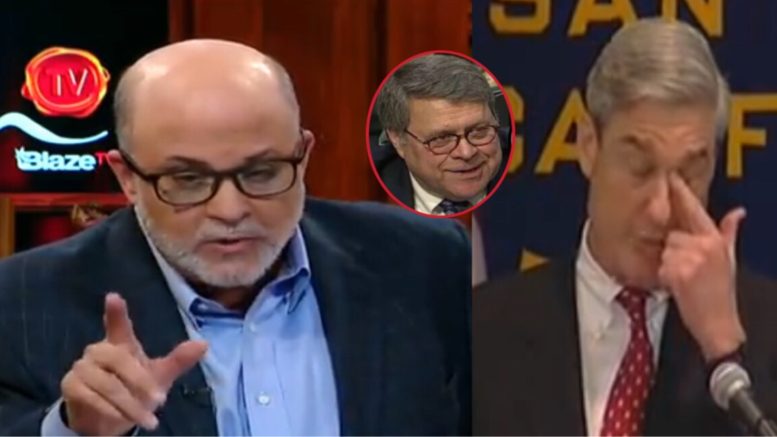 Mark Levin, host of “Life, Liberty & Levin” called into Fox News on Sunday to weigh in after Robert Mueller, and Attorney General William Barr concluded “no collusion” with Russia and the Trump campaign.

He pushed back at Mueller and the Democrats for their filthy and political games that they’ve pulled on the American people and the President.

Fox News reports, in a four-page letter to the leaders of the House and Senate Judiciary committees, Attorney General William Barr wrote that Mueller, a former FBI director, “did not find that the Trump campaign, or anyone associated with it, conspired or coordinated with the Russian government” or Russia-linked organizations in either “disinformation and social media operations” or “computer hacking operations designed to gather and disseminate information to influence the [2016] election.”

Related: Trump Breaks His Silence On Special Counsel’s Report As Barr Releases Findings: ‘This Was An Illegal Takedown That Failed’)

Mark Levin said of Robert Mueller’s report, “Not only was it a cop out, I think he was a coward, and I’ll tell you why: he didn’t have a case.”

Levin went into further detail explaining why Mueller didn’t have anything.

“He didn’t the pull the trigger on this, not because it was a cop out, but because he didn’t have probable cause. He didn’t have a case, number one.” Levin said.

“Number two: collusion. The same chairmen of these committees were out banging the drums and beating their chests. These are the same individuals who brought us to this point with the same prosecutor.” Levin further asked, “And I do not respect this prosecutor at all. It took him two years to tell us there was no collusion?” (Video Below)

Levin fired off and declared that Mueller should have come to the microphone months ago to admit that there was no collusion.

He noted that people need to be held account for dragging the President through the mud, including many people in the House of Representatives. “He was called a traitor, he was called a spy, he’s been called worse and now, they want to investigate other areas.”

“The facts are these: no collusion, no obstruction.” He announced, “If there was obstruction, then bring your damn case! Subpoena the President, take it all the way to the Supreme Court.”

“It’s a big day for the President. The Democrats are glum and they need to be held to account; everybody who was involved.” He said.

(Related: When Pressed On Mueller’s Findings, Trump Has One Comment For The Media: ‘America Is The Greatest Place On Earth’)

Levin also said that Congress has article one powers, but they do not have criminal investigative powers. “It is not up to the Executive Branch to serve as an impeachment arm of the House of Representatives to conduct investigations for them.” (Video Below)

Further, he tweeted, “Will any media executives, hosts or reporters be fired for their complicity in promoting a 2 year hoax that undermined the nation & sought to cripple the Trump presidency?CNN?MSNBC? NY Times? The Fox prime-time opinion hosts, all of whom have been smeared & boycotted, got it right.”

Will any media executives, hosts or reporters be fired for their complicity in promoting a 2year hoax that undermined the nation & sought to cripple the Trump presidency?CNN?MSNBC? NY Times? The Fox prime-time opinion hosts, all of whom have been smeared & boycotted, got it right

(Related: Levin Blasts Dems For Trying To Change Election Laws: ‘This Is Very Good Banana Republic Of This Democrat Party’)